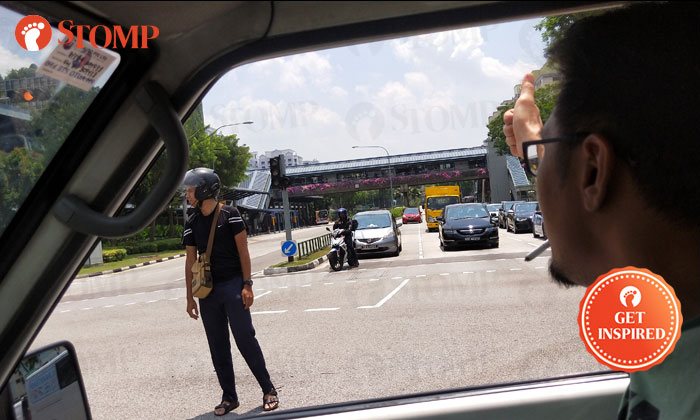 Drivers and riders were stuck in a traffic jam after the traffic lights at the junction of Woodlands Avenue 6 and Avenue 7 stopped working on Saturday afternoon (Mar 23).

Thankfully, one rider took it upon himself to step forward and direct traffic flow to ease the situation.

Stomper Emilia and her husband were heading to Thomson when they passed the junction.

"It was about 2pm and the traffic was really heavy," she told Stomp.

"From afar, we saw a man directing traffic.

"We thought he was a Traffic Police officer at first but soon realised he was wearing home clothes.

"He had parked his bike by the side of the road and was standing under the scorching hot sun while helping to ease traffic flow.

"When we passed by him, my husband said, 'Baik ah, brother' (Good, brother) and gave him the thumbs up sign.

"He waved at us and continued to help other motorists.

"He should be commended for his initiative!"