Biker thrown off motorcycle after getting side-swiped by car, nearly hit by truck 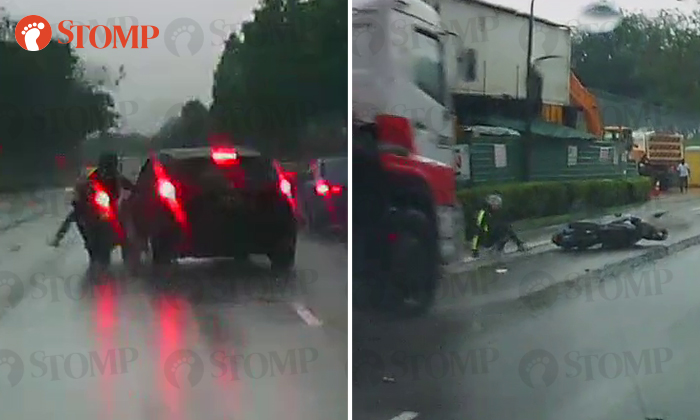 A motorcyclist who was thrown off his bike after getting sideswiped by a car narrowly avoided being run over by an oncoming truck.

Stomper Cedric, who contributed a video of the incident, said it occurred along the Seletar Expressway (SLE) towards the Central Expressway (CTE).

A timestamp on the video shows that it was recorded on Dec 13 at around 4.14pm.

In the clip, a car can be seen hitting a motorcyclist that was on its left, seemingly while trying to switch lanes.

The impact caused the motorcyclist to be flung off his bike and onto the right side of the road.

While the biker tried to get up on his feet, a truck can be seen approaching on the leftmost lane of the road.

Fortunately, the truck driver made a swerve to the right in time and narrowly avoided the motorcyclist, who also retreated onto the pavement.

Cedric told Stomp: "I hope that this video will help the motorcyclist in his claims against the Honda Vezel."

Related Stories
Man flung off bike after crashing into Mercedes along PIE
Hey SJQ8760D, your illegal turn left biker unable to stand, walk or work due to injuries
Biker and pillion rider thrown off motorcycle after car driver jams on brakes, 'swings' to the left
More About:
motorcyclist
accident
truck
biker