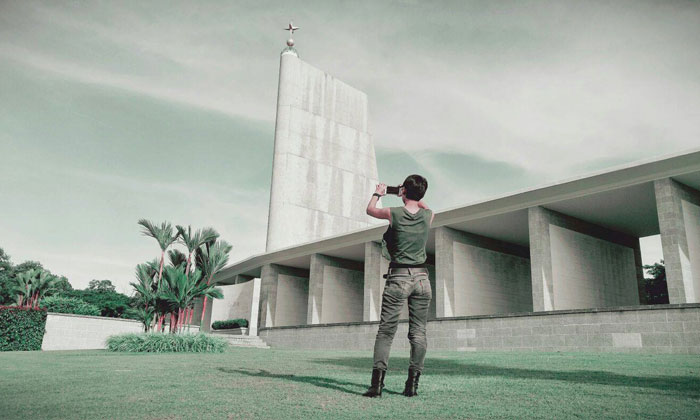 InstaScram rides to the far West of the island, to pay homage to the ones who fought for our freedom in our #memorials episode.

In this new travel series, Nessa gets inspired by post-worthy photos on social media, hunts down panoramic locations on her motorcycle, and sources out the stories behind them.

But, not all the locations she finds are light-hearted and full of cheer. The grace and beauty of some war memorials in Singapore are tainted by tales of heartbreaking heroism and victorious valour.

Reflections at Bukit Chandu, a museum-memorial that opened in 2002, dedicated to preserving the heritage and war memories from World War II. The location of the restored bungalow is not far from where the Malay Regiment fortified their last stand against the invading Japanese in the Battle of Pasir Panjang. The Japanese outnumbered them almost ten to one.

Listen to the stories of famed war hero Lieutenant Adnan bin Saidi and his platoon of 42 men in pictures, videos and statues within the building.

The centre is also connected to the Kent Ridge Park Canopy Walk. Make it a part of your next hike with your loved ones, if you’re looking to combine nature with a dose of history and culture.

Nessa also rides down the same road the invading troops used to descend upon Singapore during the Japanese Occupation, to reach Kranji War Memorial. It is a monument of ethereal beauty that chronicles countless narratives during the war-torn history of Singapore.

Kranji War Memorial was first built as an ammunition dump for British forces, then a hospital burial ground, and it has since been dedicated as a final resting place and memorial for more than 28,000 soldiers from various Allied countries, who died defending Singapore and Malaya during the war.

24,000 names of Allied servicemen whose bodies were never found are inscribed on the walls of the central memorial, which is called the Singapore Memorial. The design represents the three branches of military, the army - with its precise pillars; the air force - its soaring ‘wings’; and the navy - its steady ‘periscope’.

The State Cemetery is also found here, where you can find the final resting places of Singapore’s first and second President Yusof Bin Ishak and Benjamin Sheares .

Related Stories
Join Biker Nessa and her Triumph Scrambler as she rides to photo-worthy places in Singapore
Exclusive video shows coming your way on SPH sites: Here's how you can catch them
More About:
Instascram
cool
motorbike
motorcycle
motorcyclists
singapore
instagram
travel