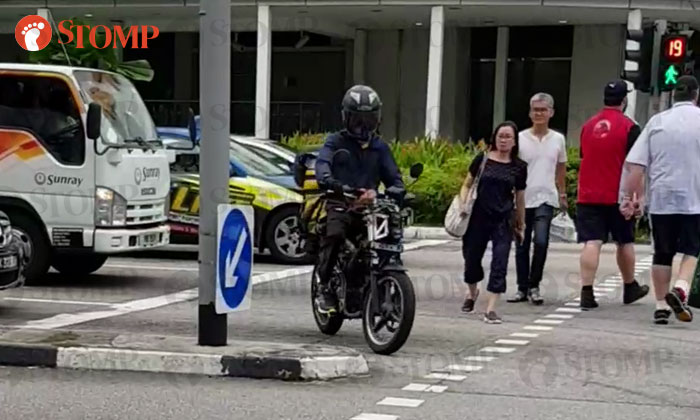 A motorcyclist was caught on camera making an illegal turn along Hong Kong Street on Sep 16 at around  5.55pm before allegedly confronting Stomper Kevin who took the video.

In the footage Kevin recorded, pedestrians can first be seen crossing the road as the green man was showing.

The motorcyclist then rode across the pedestrian crossing from the pavement, and made an illegal right turn on the road.

After recording the incident, Kevin made his way across of the road and walked towards The Central mall.

He told Stomp that one to two minutes later, just as he was about to enter the mall, the motorcyclist confronted him.

The motorcyclist was on foot at that point of time, and the Stomper was unsure how he got to him in such a short span of time.

In a telephone interview, Kevin said that the motorcyclist told him to delete the video and tried to take the phone away from him.

Kevin however, had the better grip and managed to hold on to the mobile device.

He then informed the motorcyclist that he intended to submit the video to the Land Transport Authority.

For the next five minutes, Kevin said that the motorcyclist continued asking him to delete the footage.

He, however, did not give in and insisted that it was his right to report what had happened to the authorities.

The motorcyclist then left the scene thereafter.

See his illegal turn in the video below. The confrontation was not captured on camera.