Biker in coma after tree branches fall on him: 'We don't know if he will wake up' 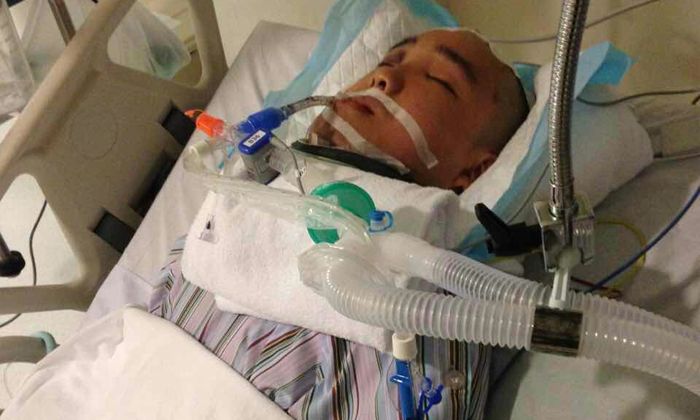 The motorcyclist who was admitted to the Intensive Care Unit (ICU) in Khoo Teck Puat Hospital after a tragic accident on July 20 remains in a coma.

It was earlier reported that Mr Lee Kar Choon, 23, had been knocked unconscious by a falling tree along Admiralty Road West, near Woodlands Waterfront Park, during heavy rain.

Stomper Jonathan, who is the victim's brother-in-law, had appealed for witnesses to the accident and said:

"What we know now is that the tree on the opposite lane fell off and hit the lamp post. Therefore, the thick tree branches fell and hit his head."

Mr Lee, a Malaysian, had been heading towards Jordon International Food Processing, a ham-and-sausage factory in Woodlands Loop, where he is a general supervisor in production.

The National Parks Board and Singapore Land Authority said the tree is under their purview, and the incident is currently under investigation.

According to a report on The New Paper, he remains in a coma and his family members are still waiting for him to regain consciousness.

Doctors have told them that, at best, he will become a paraplegic and blind in one eye, said his 26-year-old sister, Madam Lee Hui Ting.

"We don't even know if he will wake up," she said, adding that her brother had serious injuries to his head, jaw, eyes and throat.

"The doctor told us that the best-case scenario is that he will be half-paralysed and blind in the right eye. That's why we are very worried."

Stomper Jonathan told The Straits Times that Mr Lee had surgery to remove a blood clot in his brain.

"The doctor told us that his condition is now stable, but still critical," he added.

Mr Lee's wife is especially worried about how she and their daughter will cope as he is the family's sole breadwinner.

She told The New Paper: "Even if he wakes up, someone will still need to look after him, and he will need a long time to recover. I don't know if we can be normal again."

Related Stories
Appeal for witnesses: Man lands in ICU after tree branches fell on his head at Woodlands Waterfront
More About:
accident
injured