Biker in coma after getting hit by tree branch: Wife wants to tell him she's pregnant 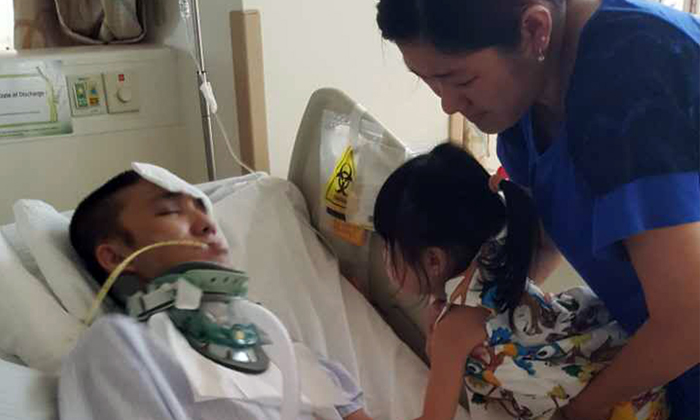 The 23-year-old motorcyclist who fell into a coma after an accident on July 20 remains unconscious even after a month.

It was earlier reported that Mr Lee Kar Choon had been knocked unconscious by a falling tree along Admiralty Road West, near Woodlands Waterfront Park, during heavy rain.

His brother-in-law, Stomper Jonathan, had written in to Stomp to appeal for witnesses and said: "What we know now is that the tree on the opposite lane fell off and hit the lamp post. Therefore, the thick tree branches fell and hit his head."

Mr Lee, a Malaysian who had been on the way to work at a factory in Woodlands Loop when the accident occurred, suffered multiple skull and facial fractures.

He was in the intensive care unit of Khoo Teck Puat Hospital for 14 days and also had surgery to remove a blood clot in his brain.

Doctors told Mr Lee's family that the best-case scenario is that he will be half-paralysed and blind in the right eye.

About two weeks ago, he was moved to a normal ward.

It was also around that time that Mr Lee's wife, Madam Chai You Yuet, found out that she was pregnant.

According to The New Paper, the couple been trying for a second child, who would be a companion for their two-year-old daughter, Katherine.

The 23-year-old housewife said: "It is supposed to be happy news, but it is hard to be happy considering his condition. We have been discussing a second child for a while. He said it doesn't matter if it is a boy or girl, he just wanted our daughter to have a playmate."

She added softly: "I've been feeling unwell, but I thought it was just fatigue from taking care of him in the hospital. I told him as soon as I knew about this new life and how he has to be strong and wake up soon."

Mr Lee's medical bill comes up to over $84,000, which his family is also concerned about.

Mr Lee's company will cover $40,000 and the family has been trying to raise funds, but without much success.

It is still unclear if they will get any compensation in Singapore.