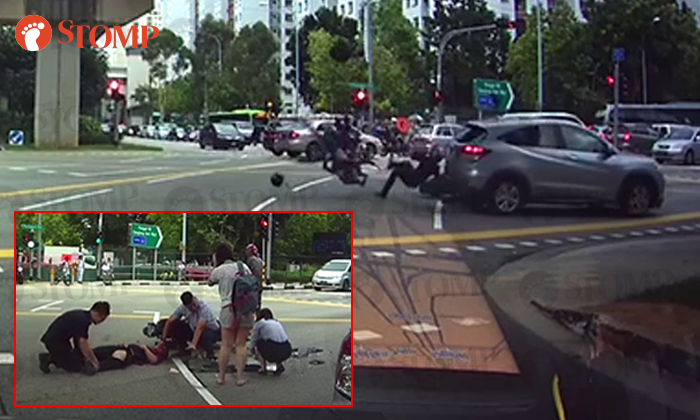 A motorcyclist and his female pillion rider were flung off their bike after getting hit by a car at a traffic junction in Punggol on Wednesday morning (July 11).

Stomper Edros shared two videos of the accident, which occurred at the junction of Punggol Road and Punggol Field, that have been circulating online.

One clip shows the motorcycle beating the red light and colliding with a silver car that was making a turn at the junction.

The motorcyclist and his rider were then thrown off their bike.

Several motorists and passers-by immediately rushed forward to render assistance to the two victims, who were lying on the road.

In response to a Stomp query, the police said that they were alerted to the accident involving a car and a motorcycle at 7.28am.

The Singapore Civil Defence Force (SCDF) told Stomp that it responded to the accident at around 7.30am.

The 29-year-old motorcyclist and his 27-year-old pillion rider were both conscious when taken to Changi General Hospital.