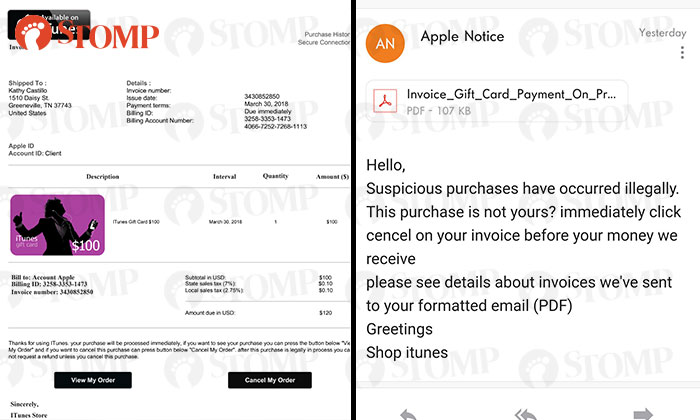 Stomper S recently received an email saying that she had purchased an iTunes Gift Card, along with a PDF invoice receipt attached.

The email also flagged the purchase as suspicious and advised Serene to check the details on the receipt.

Puzzled as she had not made any purchases, Serene clicked on the receipt which indicated that she had ‘bought’ a $100 iTunes Gift Card.

She clicked on a ‘Cancel my order’ button and was brought to a fake Apple website, which required her to log in to her iTunes account.

The website then asked her to fill up essential information such as her home address.

“I remember that iTunes never required me to put in my address, and why would they?”

S immediately knew that she had been scammed.

Next, she went to the official Apple website to check if there were any purchases.

She could not find any mention of the $100 Gift Card in her transaction history or in her shopping cart.

S thus decided to send an email to Apple and received a reply later clarifying that neither the email nor its sender is associated with Apple.

“The email is a phishing attempt, designed to trick users into visiting a website.”

S was also assured that that had been no such purchases.

On its official site, Apple warned its users to be aware of scams involving iTunes Gift Cards.

It also said that users who suspect that they have been victims of scams can contact the Apple support team.