'Belle' who fed uncle beer at Bedok coffee shop given warning, will be transferred 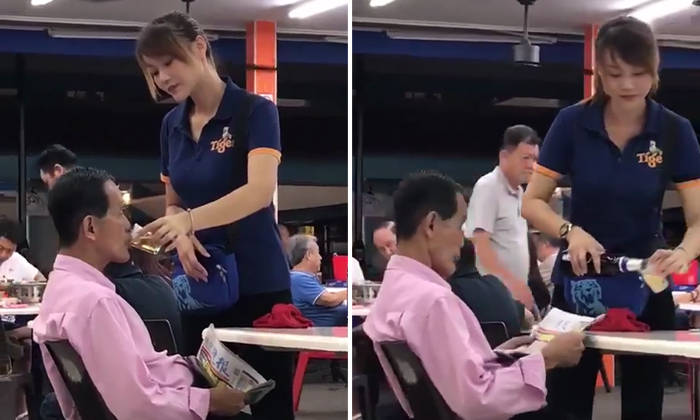 A beer lady who was seen feeding alcohol to a customer at a coffee shop in Bedok has been given a warning, said Asia Pacific Breweries Singapore (APB).

A video of the incident was posted on Facebook on Sunday (Mar 8), and shows a woman in a Tiger Beer shirt holding up a cup of beer to a male patron's mouth for him to drink from.

The 21-second clip was accompanied by a caption that said: "Beer ladies nowadays still have this kind of service. But this service costs $50."

In the video, someone in the background can also be heard saying that the service costs $50 before breaking out into laughter.

The video, which was recorded at a coffee shop located at Block 59 New Upper Changi Road, has garnered over 1,200 shares to date and drawn numerous comments from amused netizens.

Shin Min Daily News reporters visited the coffee shop and received confirmation from a source that the incident had indeed occurred.

According to the source, the woman in the viral video is known as the belle of the beer ladies at the coffee shop.

A coffee shop vendor also told Shin Min that the beer lady in question had been working there for half a year and possesses a positive attitude.

The vendor said: "That uncle is her regular customer who comes to drink every day.

"At that time, she asked him if he wanted to drink beer. He said yes but was reading the newspaper, so she just fed him beer without thinking much."

The vendor also clarified that there was no $50 fee or anything about having to sit on the customer's lap.

In response to queries, APB said it had conducted an investigation after learning of the matter.

The beer lady involved in the incident has been given a warning and will be transferred to another workplace, reported Shin Min.

APB also said that the employee's actions did not comply with the company's Brand Promoters Policy and that it would not tolerate such behaviour.

The company has since reminded all beer promoters to pay attention to the policy, which helps ensure their safety and avoid harassment, and also guides them on how to serve customers.