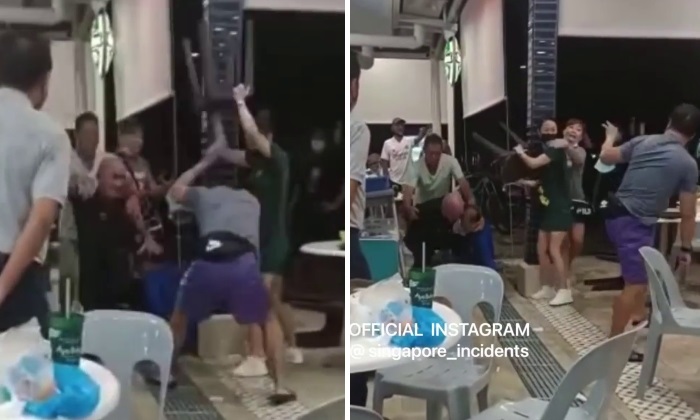 One man was hit with a stool and another threw a bottle.

The coffee shop fight in a video circulating online resulted in one man arrested and another taken to the hospital.

Although the video surfaced last week, the incident actually took place about two weeks earlier on May 14, said police, who were alerted to the fight at Block 417 Yishun Avenue 11 at 8.45pm.

Posted on Singapore Incidents, the video shows a beer promoter hitting a man with a plastic stool and a man in black grabbing a man in blue and raining blows on him.

Others were trying to restrain the beer promoter and the man in black. A woman was shouting at them in Mandarin to stop fighting and grabbed the stool away.

The video then abruptly cuts to the man in black calmly walking away from the coffee shop and throwing a glass bottle at someone. The sound of breaking glass is heard and the man calmly walked back towards the coffee shop.

Ms Chen said: "The beer promoter involved was a replacement. She was here for only a few days and I haven't seen her since."

Ms Chen told the Chinese evening daily that the man in black was a regular customer and the man in blue was new.