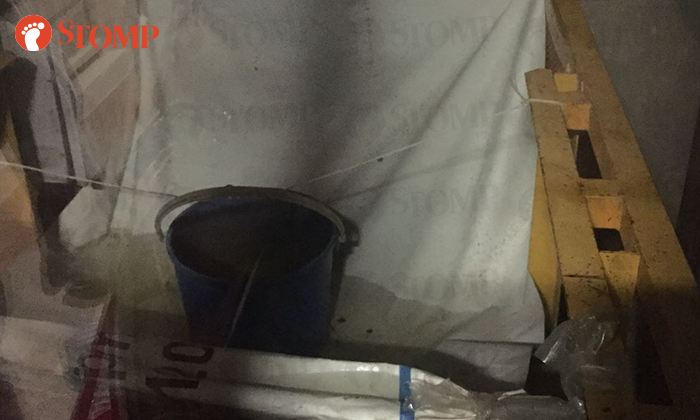 Stomper Mohammad is concerned after seeing a 'makeshift remedy' to a leaking lift  -- a pail and canvas sheet placed on the top of a lift -- at lift lobby C, Block 95 Bedok North Avenue 4.

In an interview with Stomp, Mohammad said that the lift has been frequently breaking down since 2015.

According to Mohammad, the lift would break down once every few months, and when it rains, water would seep in, collecting as a puddle on the lift floor.

Mohammad said that he once approached a lift technician who told him that there was a leak on the roof of the lift.

Three weeks ago, Mohammad happened to see the top of the lift through a glass panel after it stopped one floor below his.

“I was quite shocked to see them placing just a pail and canvas sheet on the top of the lift to prevent water from seeping into the lift.

“I was simply aghast at how incredibly ridiculous this was.

"What if the water flowed into the electrical components in the lift?"

In response to a Stomp query, a spokesman from the East Coast-Fengshan Town Council said that it was investigating the issue.