Bedok double deaths: Mum looked sad and pale weeks before she fell from block with baby 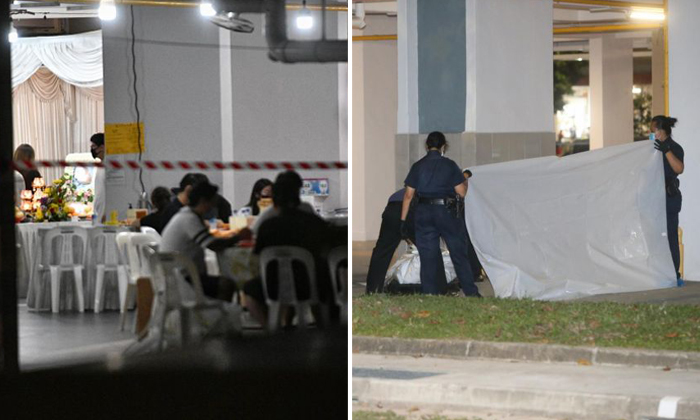 Friends and family gathered at Blk 81 Bedok North Road on Friday (Oct 30) night for the Buddhist funeral rites of a 35-year-old mother who fell from a Housing Board block with her five-week-old daughter.

The woman and her infant daughter were pronounced dead at 5.47pm on Thursday after their bodies were found at the foot of Block 81 Bedok North Road.

The police are investigating the incident as a case of unnatural deaths.

Shin Min Daily News identified the woman as Ms Tay Mei Mei. The Straits Times learnt that she and her husband, Mr Ong Chee Meng, both in their 30s, were married in 2013 and have a four-year-old daughter as well.

ST understands that they lived in the block where the incident happened.

Nobody was home in a visit to the unit, but there was a bag of food and a note left at the door.

In the void deck, relatives and friends were helping to ready a wake with fresh flowers and fruits.

Grim-faced friends and neighbours alike lined up to pay their respects to both mother and daughter, bowing before a pure-white altar behind which two coffins lay side by side, while two monks carried out funeral rites.

Mr Ong did not speak to members of the media, but sobbed and had to be supported by family members as he approached the coffins.

One of Mr Ong’s relatives and a representative for the deceased’s family told ST: “We are still unclear as to what happened last night, and are trying to piece things together.

“Chee Meng is still distraught and grieving, and I hope we can have some space to mourn.”

“We are supporting him as we try to piece together what actually occurred,” said the 29-year-old, who works in the aviation industry and would only give his name as Mr Tan.

He said that Ms Tay had seemed in good spirits when he last saw her at Chinese New Year.

“I have always known her to be a very cheerful person,” he said.

About three weeks before the tragic event on Thursday evening, a resident living in the same block noticed Ms Tay appeared to be sad.

Madam Low, who is in her 80s and declined to give her full name, said: “She looked very pale, and her baby kept crying loudly in the lift.

“I am not familiar with her or her family, but I thought she was a very quiet and reserved young woman,” she said in Cantonese.

A neighbour in his late 70s, who wanted to be known only as Mr Ismail, said he had seen the deceased and her older daughter in the estate several times.

“I saw her once when she was quite heavily pregnant. She looked very happy then, and was taking her daughter cycling,” said Mr Ismail, who lives in the same block.