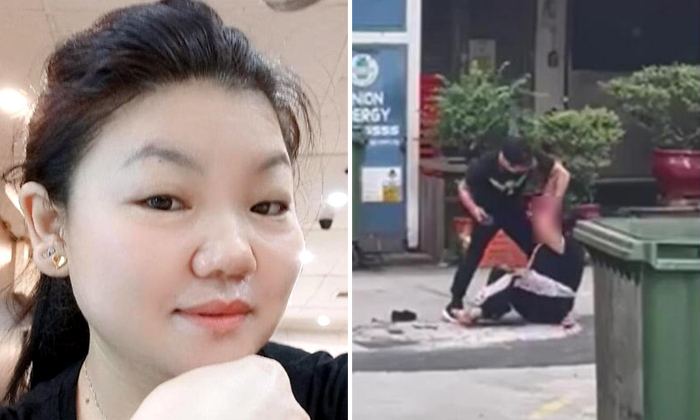 The victim of a brutal attack outside a restaurant in Beach Road last month has given permission to a charity platform to raise funds to help her meet her bills and caregiving needs.

Charity platform Ray of Hope launched the campaign on Tuesday (May 10) and hopes to raise about $105,400 for Ms Han Hongli, 42.

A check by The Straits Times showed she is now hospitalised at Ren Ci Community Hospital.

On its website, Ray of Hope said Ms Han, a work permit holder from China, has undergone four operations for injuries on her head, eyes and hands.

The charity platform added: "She was also advised that she would need two more eye operations to regain her eyesight.

"She shared that despite her injuries, she is worried about her two children back home."

Ms Han, who is from Henan province in central China, has two children aged 20 and 17. They are being cared for by her family.

She told caseworkers from Ray of Hope: "I am in great pain every single day since the incident. Thinking about my children keeps me alive."

In a previous interview, Mr Edmund Tan, owner of the eatery, said he bought basic medical insurance coverage of $15,000 a year for Ms Han.

Ray of Hope said that as her medical fees are likely to increase, the target sum will be raised when updated medical bills are received.

More than 50 restaurant owners operating in Bugis, Chinatown and Geylang have also raised around $20,000 for Ms Han in a separate fund-raising drive started by Mr Leonard Shi.

The 42-year-old owner of Samurai BBQ, which is in Liang Seah Street, told ST earlier that he hopes the funds will help with her recovery and in supporting her children.

He said he will hand the funds to Ms Han when she is feeling better.

Videos of the horrific attack on April 14 show the alleged assailant, Cheng Guoyuan, 46, hacking at his estranged wife with a chopper in front of Zhong Hua Steamboat restaurant.

Restaurant workers had to intervene by throwing plastic chairs and bins to stop the attack.

The police awarded nine of these men Public Spiritedness Awards on April 18 for helping to fend off the attacker.

Cheng was charged with attempted murder on April 16. His case is pending before the courts.

Those who are interested to donate can do so here.