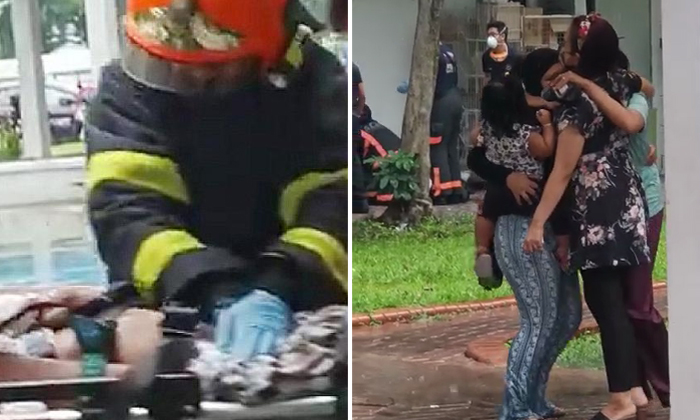 A fight between two men on Sunday ended with one dead and the other arrested.

The fight happened at about 3pm in Beach Road in the vicinity of Block 6, near the popular Golden Mile Food Centre.

A 67-year-old man was found lying motionless at the scene. He was rushed to Tan Tock Seng Hospital, where he was pronounced dead.

The police said a 56-year-old man was arrested and will be charged with murder today.

The victim's granddaughter, Ms Emillia Marlinda, 22, told The New Paper she had just left her home and was at the lift lobby when she saw someone had collapsed on the grass patch below her block.

She ran back to her flat to alert her father, who came out and recognised the man.

"When my dad told me it was my grandfather, we quickly ran downstairs," she said yesterday.

Ms Emillia, a pre-school teacher, said her grandfather's face was covered with blood. There was blood around him as well.

She said: "(My family) cried when we saw him, we couldn't take it. The police were performing CPR (cardiopulmonary resuscitation) on him.

"I saw the (alleged attacker) squatting at the side and he had already been handcuffed by the police."

She said she did not recognise the younger man.

Breaking into tears, Ms Emillia said: "They told us they couldn't save him. When I saw the police performing CPR on him, I knew he couldn't be saved."

A witness told Chinese-language newspaper Shin Min Daily News that he saw a well-built man throwing punches at another man, who fell to the ground.

He said: "He was hitting the man's head and body, and after the man fell to the ground, he stopped moving.

"The man then emptied the older man's pocket and repeatedly said the (older man) had stolen something."

According to the witness, the alleged attacker fled the scene after the attack, but was brought back by the police.

A set of dentures and a pair of spectacles were also spotted at the scene.

The witness said he had chatted with the older man a few times.

A cleaner, 63, who was passing by the area, said he saw a man kneeling on the grass muttering to himself.

He decided to check what had happened and was shocked to see another man lying on the ground with his face bloodied.

He said: "The (man on the ground) wasn't moving, but the other man was still hitting him. I quickly tried to stop him and told him that if he continued, the other man would die."

But instead of stopping, the man refused to listen and shouted at him, he added.

The cleaner said the older man was not responsive and was breathing weakly when he later checked on him.

Ms Emillia told TNP that her grandfather lived with her and four other family members in the area for about 10 years.

Although her grandfather had to go for dialysis, he was still active.

She said: "He was a happy-go-lucky man and liked to roam around downstairs, and would buy drinks for my sister. We're still trying to accept his death."