Battle of the elderly tissue sellers: 5 of them within 10m at Woodlands MRT station 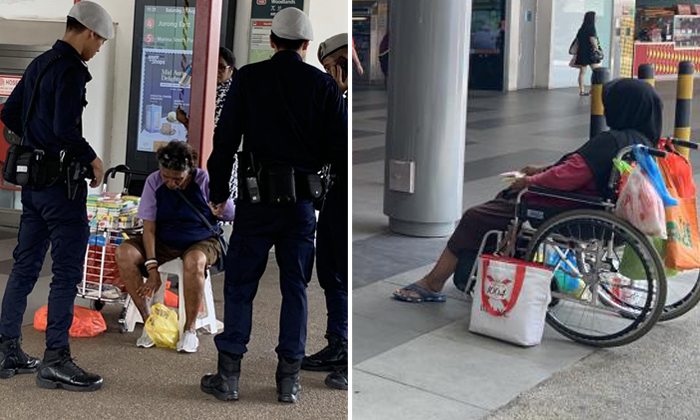 Competition is fierce among elderly tissue sellers at the MRT station and the bus interchange in Woodlands, with at least five of them within a distance of 10 metres.

They noticed that there were five vendors from the MRT exit to Causeway Point, all within a distance of no more than 10 metres.

Most of these vendors were elderly people on wheelchairs and held tissue paper that they tried selling to passing crowds.

One tissue seller auntie, who declined to be named, said competition was intense with close to 10 vendors in the area during peak hours.

"We sell at a fixed price of three packets for $1, but there are people who spoil the market by selling two packets for $2, making customers doubt [our intentions]," she added.

The auntie also shared how neighbouring vendors would snatch business by calling out loudly to her customers while they were buying tissue paper from her.

Some would also get upset when Good Samaritans buy her food.

Mr Cai, a 66-year-old man who has been selling tissue paper for four years, said he takes the first train from Kallang Bahru to Woodlands, where he operates till around 2pm daily.

He added: "There was no business near my house at all so I came to Woodlands.

"My wife had a stroke in 2009 and my children do not earn a high salary, so I came to earn some extra money myself and contribute to household expenses."