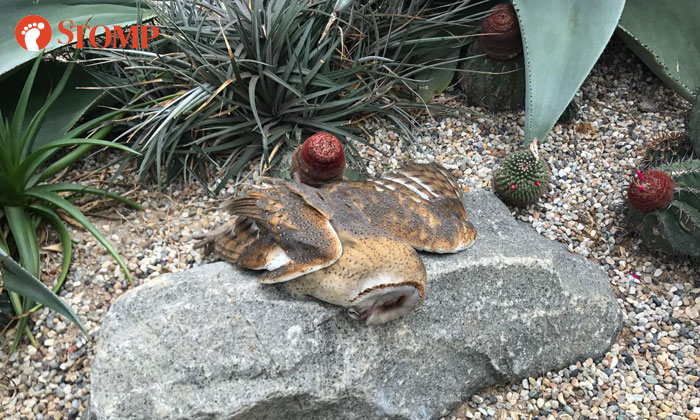 A Stomper was visiting the Sun Pavilion at Gardens by the Bay on Monday (Dec 17) when he saw a dead barn owl lying on a rock.

He told Stomp he was there at about 1pm and was shocked when he saw the owl lying amongst a variety of cacti and succulents.

He shared photos he took of the bird with Stomp as well.

"I alerted a landscapist nearby to the bird and he came over to pick it up," he said.

The raptor's cause of death is unclear.

Stomp understands a Gardens by the Bay staff removed the dead bird and disposed of it.

They are elusive and so, are not often sighted although Stomp has reported a few sightings over the years.

They typically roost and nest in abandoned buildings and also make their home in trees.

Related Stories
Owl stuck in Genting Lane warehouse, freed by Stomper and colleagues
Owl looks down at passers-by at Bukit Batok West
Knock, knock... hoo's there?
More About:
owl
Gardens by the Bay