Banned female driver, 21, arrested after fleeing from TP officer and going against traffic 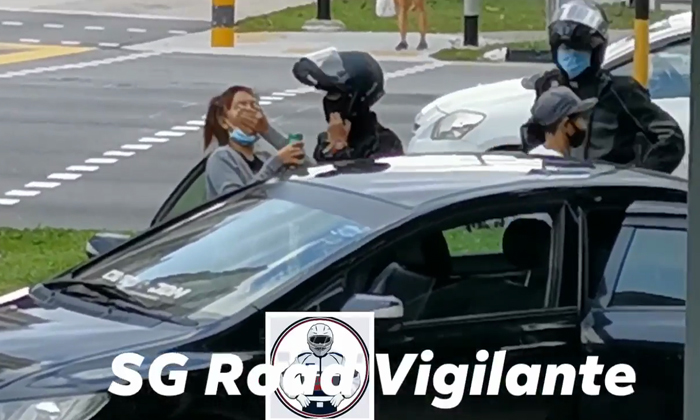 A 21-year-old female driver has been arrested after she refused to stop when asked to do so by a police officer, proceeding to drive against the flow of traffic and almost colliding with several oncoming vehicles.

She also revved up the car's engine when her vehicle was eventually stopped, prompting the officer to jump over the car's bonnet for his personal safety.

The police said on Saturday (May 30) that the woman was disqualified from driving and drove the car without the owner's consent.

No one was injured during the incident.

The dramatic pursuit on May 28 at 5.05pm began when the officer spotted a car suddenly cutting from Lane 1 to Lane 3 along Tampines Expressway (TPE), before cutting across the chevron markings to turn into Jalan Kayu road.

This caused another driver to apply the emergency brake to avoid a collision and the officer to signal for the driver to pull over.

She sped off, instead, committing several serious traffic violations until she was stopped at the slip road of Sengkang West Avenue leading into Fernvale Road.

The police said: "As the police officer was walking towards the driver's side of the car, she started to rev up the car engine. For his personal safety, the officer quickly jumped over the car's bonnet to land on the other side of the car to avoid being hit in case the car surged towards him.

"Though initially uncooperative, she eventually exited the car and cooperated with the police officer."

The police have impounded the car and are investigating the incident.

If found guilty of dangerous driving, the driver could be jailed for up to a year, fined up to $5,000, or both, with repeat offences carrying double the maximum penalty.

Those who drive while disqualified can be jailed for up to three years, fined up to $10,000, or both. The offence of taking a motor vehicle without the owner's consent carries a jail term of up to three months, a fine of $1,000, or both.