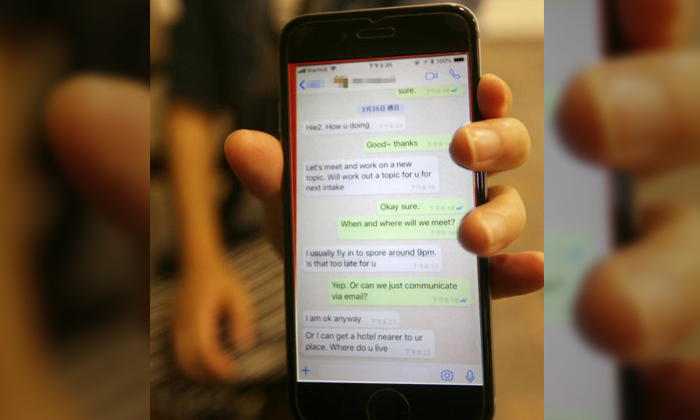 A female student alleged being sexually harassed by her supervisor during her internship at a bank and was shocked when she found out that her friend was also a victim.

Ms Li, who was formerly from the Singapore Management University (SMU), told Shin Min Daily News of her ordeal after reading a report about a case of inappropriate conduct that a National University of Singapore (NUS) student allegedly experienced.

The 25-year-old said that following her school's recommendation, she interviewed for an internship position at a foreign investment bank in Feb 2018 and successfully earned a five-month contract.

According to Ms Li, she worked at a local branch while her supervisors regularly flew in for meetings and routine checks.

She said: "On the day of the contract-signing, the supervisor said he was putting up at a hotel near my house during his stay in Singapore. I didn't think much of it.

"However, he later texted me 'good night' for no reason late at night."

Ms Li alleged that her supervisor came on stronger after that, sending her messages where he asked to meet and said he was at a hotel nearby.

"He usually asked to meet at around 8pm and had also invited me out for coffee alone, telling me not to let me other colleagues know," she added.

"I told him that I couldn't meet because I had to go for classes.

"However, after rejecting him, his attitude changed and he became difficult at work. I was turned down when trying to do my internship presentation nor was I allowed to ask questions."

Ms Li recalled how she did not dare report the incident to her professor for fear of affecting her internship, and could only cry in secret.

She said she has since informed the bank's Human Resources (HR) department and consulted a lawyer, as well as made a police report.

The police confirmed that a report was lodged, reported Shin Min.

When Ms Li confided in a friend regarding her ordeal, she was shocked to learn that her friend had also been sexually harassed by the same supervisor.

According to Ms Li, her friend had also gone for an interview but did not get selected for an internship. Nevertheless, the supervisor still contacted her friend.

Ms Li showed Shin Min reporters a screenshot from her friend's phone, where the supervisor had texted and offered to help her friend with the next internship intake.

"The supervisor texted to say that he would land in Singapore at 9pm and asked to meet my friend," added Ms Li.

However, her friend did not respond to the message nor did she dare to inform anyone about what happened.

In response to the allegations, a SMU spokesperson told Stomp in a statement that the school is aware of the issue.

The spokesperson added: "Student comments of this nature are always treated seriously.

"Our approach is always to advise students to be mindful of the importance of reporting truthfully what transpired, and if necessary, to report factually to the relevant authorities so that an independent investigation can take place.

"In addition, the students are offered avenues to seek counselling and the necessary assistance from our staff.

"However, it is SMU’s policy not to issue public comments on the specifics of a particular case as the confidentiality of the relevant parties have to be respected."