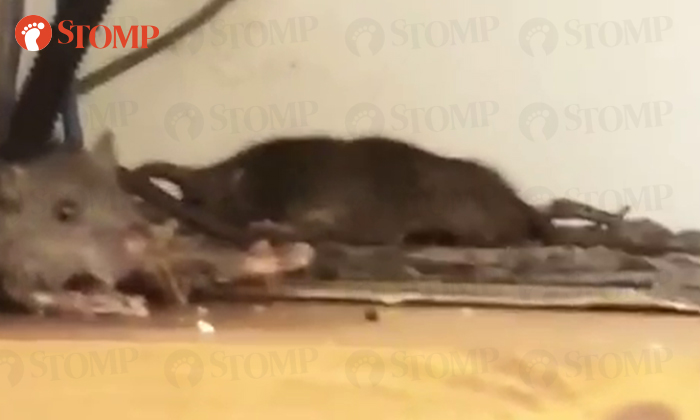 A restaurant in Balestier has apologised after a customer noticed mice on a sticky trap located behind him while he was having dinner.

Stomper Anonymous said that he was with his group of friends at Le Xiao Chu on Sunday (August 18) at about 10pm.

He said: "Halfway through eating, one of my friends saw the mice then took a video."

Stomp will not be publishing the video due to its graphic nature.

In the video, three mice can be seen wriggling and struggling while stuck to a trap.

Anonymous told Stomp: "We were sitting in front of the cabinet where the sticky trap was placed on. We didn't finish our meal and walked out. We didn't tell any of the staff there. My friends and I were all quite grossed out."

In response to a Stomp query, a Le Xiao Chu spokesman said: "I apologise for the disgusting scenes that you had to watch on the videos.

"Cleanliness and hygiene is the first priority for our restaurant as we aim to provide a quality environment as well as services.

"Since the operation of the shop, we have been engaging with a permanent pest control service which specialises in flies, cockroaches, mice, rodent and common ants.

"To be very frank, we have not encountered any problem of the sort until recently we realised an increase in mouse existence.

"It was just brought to our attention by the workers before we heard it from [Stomp]. It is also the reason why we find ways like alerting the pest control service and putting traps to get rid of it.

"The videos captured of that cabinet is where the traps were placed. We suspect that it could be the construction nearby that has caused the relocation of habitat.

"We are highly aware of the situation and have been taking this matter very seriously. It has never been intended to have our shop presented in such conditions.

"I appreciate the kind gesture for reaching out to us regarding this problem.

"Once again, we are very sorry on the issue mentioned above. We will do the best to find out the causes of the issue and solve it ASAP.

"We seek your understanding on this matter."