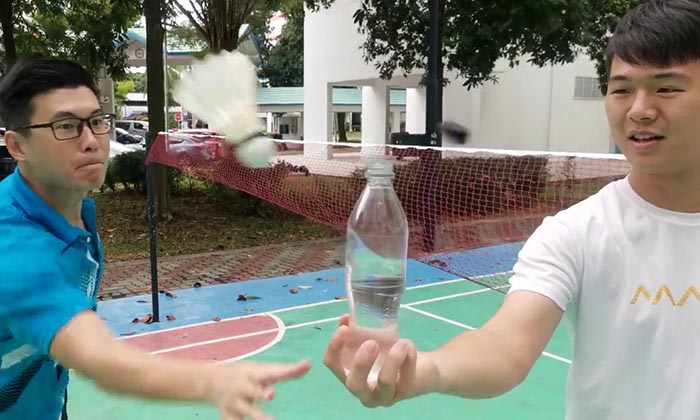 Apart from the Singapore Civil Defence Force, a badminton academy has also taken part in the Bottle Cap challenge.

Stomper Becky first chanced upon a video that was published on YouTube by Gerald and Wayne from BG Badminton Academy.

The video, which was published on Wednesday (July 17), has since garnered over 3,000 views.

When Stomp asked about what inspired the idea behind the video, Gerald said: "The inspiration came to us when we saw celebrities such as Donnie Yen and Mariah Carey taking part in the Bottle Cap Challenge, so our team figured - let's do it too.

"It was just natural that our version would feature the thing we know best - badminton.

"However, we didn't want to just do the challenge, we wanted to inspire, so we figured that it would be fun to add badminton trick shots into the mix."

It took Gerald and Wayne about three hours to film the video and another five hours to edit it.

Gerald told Stomp: "It took more than 500 tries for us to film one of the scenes, but when we succeeded, it felt like we had struck the lottery!"

"It was really challenging as we needed to be really precise. Try it out! If it's too hard, you can always switch to playing a match with your friends," said Wayne.

Related Stories
Check out SCDF's unique take on the bottle cap challenge -- using a power saw
Feeling lazy? Netizens use chest as drink holder in latest Internet trend
Vlogger tries to eat live octopus -- but gets it stuck on her face instead
More About:
challenge
viral
trend
badminton
Geylang