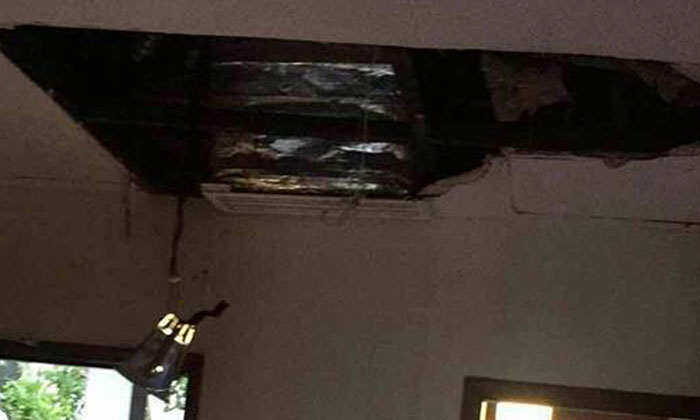 A Facebook user, Wai Shean Chau, shared her experience of staying at Avillion Hotel Port Dickson in Malaysia recently, after the ceiling collapsed in the rooms.

She took photos and videos of the debris left behind after the incident.

From the photos and videos taken, the false ceiling of a room could be observed to have collapsed, revealing an air vent column and a light which had fallen through.

Aside from the collapsed ceiling, Wai Shean also complained that the rooms were ‘worn out’ and unhygienic, citing bed bugs and rashes after sleeping on the beds.

"I booked three rooms, but unfortunately the roof of one of the rooms collapsed all of a sudden.

"Our room was flooded and some of our belongings were damaged

"We made a complaint to the resort’s staff and they allocated us a new room. However, the staff were so unfriendly.

"The room was overall worn out.

"I woke up the next morning with red spots on my face, hands and feet! I didn’t think much of it, but the spots swelled as the day went by and became itchy.

"These were bed bug bites! I’m not sure if the bedbugs came from the bed or the blanket.

"Overall, it was not a pleasant experience.

"Having bed bugs and unfriendly staff in a resort is not acceptable and I hope the management looks into this seriously.”

Within a few days, Wai Shean's post was shared over 3,600 times with many netizens expressing disgust at the hotel’s less than satisfactory facilities.

"Yes, we’ve been there before when my 3-year-old child got bitten all over and they insisted that he got the bites from the beach.

"Never went back ever since…"

After the incident, Avillion Headquarters issued a statement on its Facebook page, stating:

"Rest assure that all remedial works are being carried out ad our guest’s safety and comfort is our utmost priority.

"With regard to the incident, our hotel had apologised to the guest, relocated her immediately to our two-bedroom villa and waived her charges. "