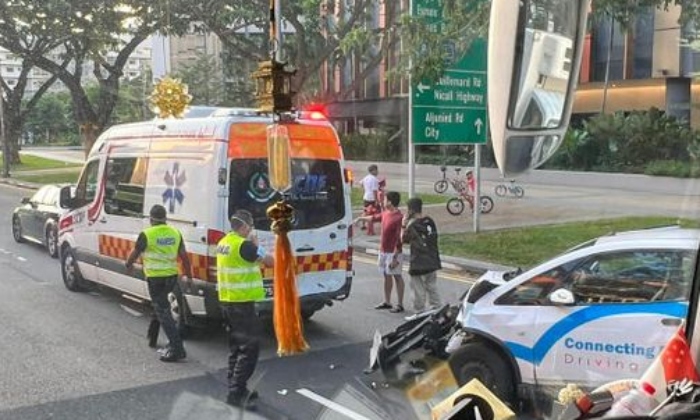 An 11-month-old baby was taken to the hospital after an accident involving an Singapore Civil Defence Force (SCDF) ambulance and two cars on Monday evening (Aug 15).

The accident at the junction of Geylang and Tanjong Katong roads happened at 6.45pm.

In response to queries from The Straits Times, SCDF said: "A patient from one of the cars was assessed for minor injuries and conveyed by another SCDF ambulance to KK Women's and Children's Hospital in a conscious and stable condition."

SCDF added that the ambulance was responding to an incident and had its blinker lights on when the accident happened.

A photograph of the accident sent by a reader to Chinese-language newspaper Shin Min Daily News shows a BlueSG rental car with a badly damaged bumper, and the SCDF ambulance is seen with some damage to its back.

The Straits Times understands that the BlueSG car collided into the back of the ambulance, which was coming to a stop. The impact caused the ambulance to move forward, hitting the car in front, which had the baby in it.

The reader said that the road, which is usually busy in the evening, was congested for almost an hour due to the accident.