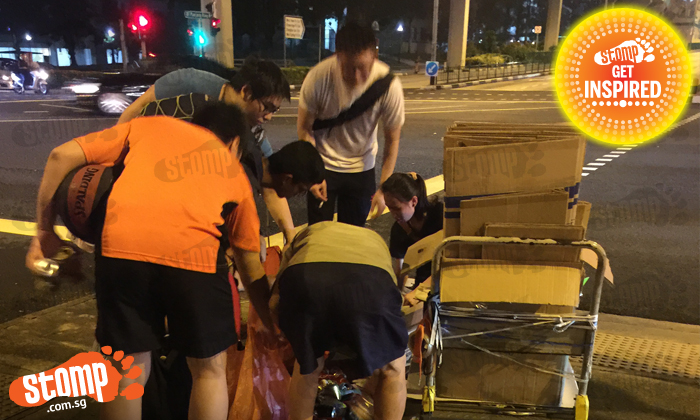 An elderly can collector accidentally toppled his trolley and sent its contents spilling out everywhere, but what happened next warmed a Stomper's heart.

The incident took place at a traffic light near Bukit Panjang Plaza yesterday night (Oct 7), at around 10.20pm.

"I witnessed a very heartwarming scene.

"An old uncle who was probably collecting used aluminum cans the whole day was pushing a trolley and was waiting at the traffic light.

"He accidentally toppled the trolley and a huge bagful of the cans fell out and scattered.

"There was an awkward pause for a moment and then almost simultaneously, people around started bending down and helped the old uncle to pick up his cans.

"To see that many people bending down and picking all those cans together, despite being strangers, doing something together for an elderly, that is something praiseworthy and should be continued in Singapore."

Related Stories
Awesome worker climbs up Helix Bridge to return lost phone that he found in toilet
'I feel proud to live in Singapore when I see sights like this'
A wonderful story about racial harmony in S'pore: How passenger ends up having lunch with kind taxi uncle
More About:
heartwarming
kind-hearted
kudos
inspiring
elderly