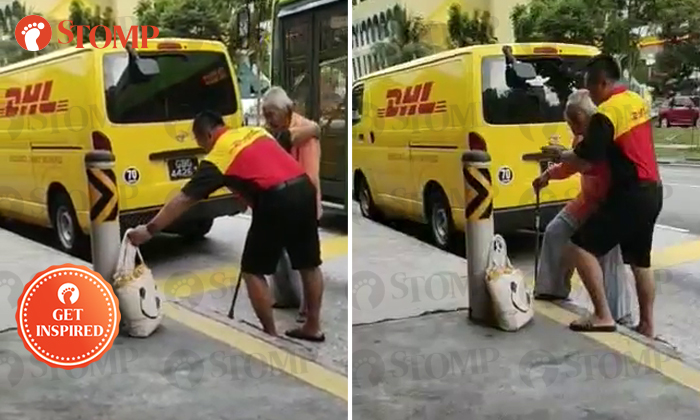 Stomper May was waiting for a bus in Redhill on Friday evening (Nov 22) when she saw a kind DHL driver going to the rescue of an elderly man.

May was at a bus stop along Tiong Bahru Road, near Redhill MRT station, at around 6.30pm when she witnessed the heartwarming sight.

May told Stomp: "I would like to give kudos to this kind-hearted man from DHL.

"I was waiting for my bus and saw an old uncle at the Shell petrol station opposite. He was holding a walking stick and had difficulty walking.

"A DHL van driver, who was passing by, stopped his van and walked to the opposite side to help the poor old uncle. He held the uncle's arm and slowly walked him across the busy road.

"I was so touched that I only managed to take a video of the last part."

A video that May sent to Stomp shows the DHL van driver first helping to place the elderly man's tote bag against a bollard on the pavement.

This allowed the DHL driver to hold the elderly man's hand and support him.

The DHL driver is then seeing helping the elderly man, who was also holding on to a walking stick, up the pavement.

In May this year, Stomper H. Leonardi shared an equally touching scene where a DHL driver gave an elderly man a piggyback across the road.

The driver was later identified as Anson Chung, 40, who told Stomp that he did not expect H. Leonardi's video to go viral as he was only doing the right thing.