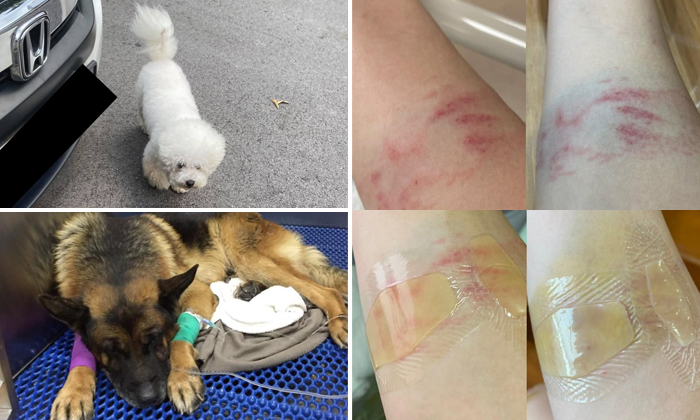 The Animal & Veterinary Service (AVS) is investigating a case involving a Bichon Frise that attacked a woman and her German Shepherd.

AVS, a cluster of the National Parks Board (NParks), said it takes all dog attack incidents seriously and will investigate all feedback received, "regardless of whether the victim is human or animal."

Its statement on Wednesday (Sep 1) comes after a Facebook post by Caterina Tan, who alleged that her neighbour's Bichon Frise had attacked her German Shepherd on multiple occasions.

An attack on August 6 left both the German Shepherd and Ms Tan, who had tried to defend her dog, with injuries.

In her post on August 11, Ms Tan shared photos of the injuries as well as videos of the Bichon Frise's aggression.

"We found that the owner of the Bichon Frise had left the pedestrian gate of their house open. As a result, the dog had run out of the premises and attacked the German Shepherd.

"Upon completion of investigation, we have taken enforcement action against the Bichon Frise’s owner for allowing the dog to be at large in a public place, which is an offence under the Dog Licensing and Control Rules.

"A second incident was reported to AVS on 6 August 2021. AVS is currently investigating this incident.

"As part of its investigation, AVS will consider the circumstances leading to the incident, including the behavioural temperament of of the Bichon Frise and the extent of the injuries inflicted by the dog.

"We would like to take this opportunity to share that there could be various reasons why dogs develop negative behaviours such as aggression towards specific dogs.

"These could be due to prior negative experiences or agonistic interactions with similar-looking dogs.

"The other reason could be the lack of socialisation or experience with certain dogs, leading to anxiety and a defensive response.

"While pet dogs may be trained to be well-behaved and obedient, they are still susceptible to mood changes and may react negatively to external stimuli or unforeseen circumstances.

"There have been incidents of pet dogs running off unexpectedly, resulting in the dogs being hit by passing vehicles, or they have caused injury to people and other animals.

"Keeping pet dogs leashed and under proper control will help to prevent such incidents. It will also reduce unintended disturbances or even harm to members of the public and/or other animals.

"We would also like to remind owners that under Rule 9(1)(b) of the Animals and Birds (Dog Licensing and Control) Rules, pet dogs must be leashed and under proper control at all times when in public spaces."

Related Stories
Woman injured after being bitten by otter that 'charged' towards her at Gardens by the Bay
Wild boar charges at woman and attacks her in 'matter of seconds' at Sungei Api Api Park
SPCA strongly advises cat owners to sterilise their pets after boy gets attacked by family cat
More About:
dog
animal attack
injured
pet
AVS
NParks