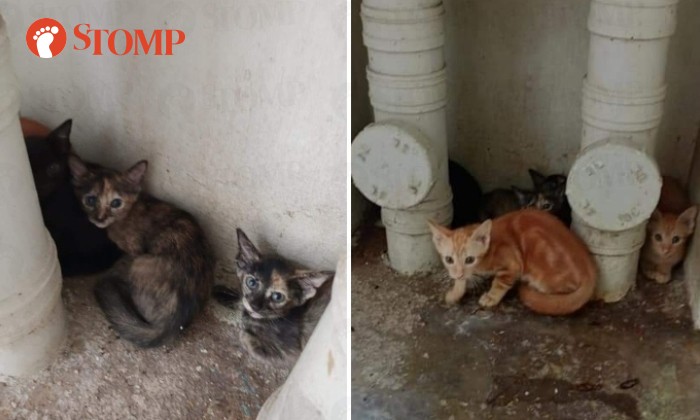 The Animal and Veterinary Service (AVS) is investigating an alleged case of pet abandonment after nine cats were found at the void deck of Block 17 Marsiling Drive.

Stomper Nur informed Stomp about this incident and mentioned that the cats were found abandoned on August 26 at 1pm.

"The cats were found by a cat feeder in the area," Nur said.

"They were believed to have been thrown out by an irresponsible owner, possibly someone living in that block.

"I believe there has actually been a rising number of pets being abandoned in this area.

"I feel very angry and disgusted. Because of this, there will be an increasing number of stray cats around here.

"Thankfully, I heard that these nine cats have been rescued by kind members of the public."

In response to a Stomp query, executive director of the Society for the Prevention of Cruelty to Animals (SPCA) Dr Jaipal Singh Gill said: "Abandonment is a serious offence which can cause much harm to the animals and is also punishable under the law.

"The case needs to be thoroughly investigated and the appropriate action taken.

"If one is not able to look after their pets, they have the responsibility to find good homes for the animals.

"There are many avenues available such as posting adoption notices online or asking friends and family for help."

Ms Jessica Kwok, Group Director of Community Animal Management at AVS, told Stomp: "AVS, a cluster of the National Parks Board (NParks), has been alerted to and is concerned to learn of a case of pet abandonment at Block 17 Marsiling Drive. We are investigating.

"Owning a pet is a lifelong commitment and owners must be responsible and provide appropriate care for the animals.

AVS will look into all feedback on animal welfare concerns and animal cruelty, including pet abandonment.

"AVS does not condone pet abandonment or mistreatment of pets and individuals, who are found guilty of abandoning their pets or fail in their duty of care towards their pets, are liable to a maximum fine of $10,000 and/or a maximum jail term of 12 months for first conviction."