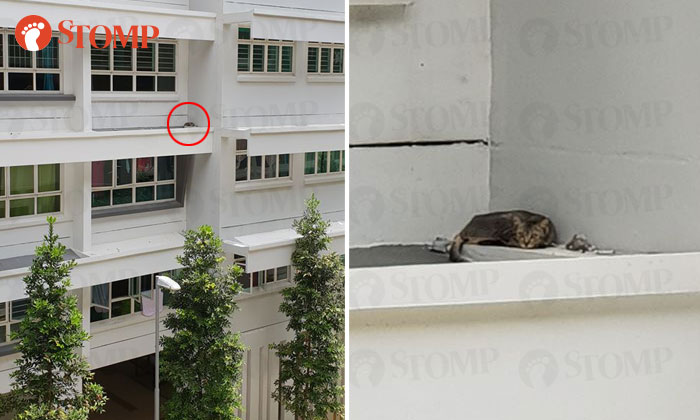 A cat stuck on a ledge at Block 663A Punggol Drive was rescued by the Agri-Food and Veterinary Authority of Singapore (AVA) on Thursday night (Feb 28).

Stomper Richard alerted Stomp to the incident and shared photos he took of the cat.

"The poor cat had been trapped on the fourth-storey window ledge for one day without water," he said.

"AVA came at night and the rescue operation lasted for about one and a half hours."

In response to a Stomp media query, the AVA confirmed they rescued the cat and are now working to find a home for it.

"AVA received feedback about a cat stuck on a window ledge at Punggol Drive with no exit points, and promptly responded to rescue the cat," an AVA spokesman said.

"We worked closely with agencies to contact residents of nearby units, who allowed us entry into their homes to rescue the cat safely.

"We are working with a rehoming partner to rehome it."