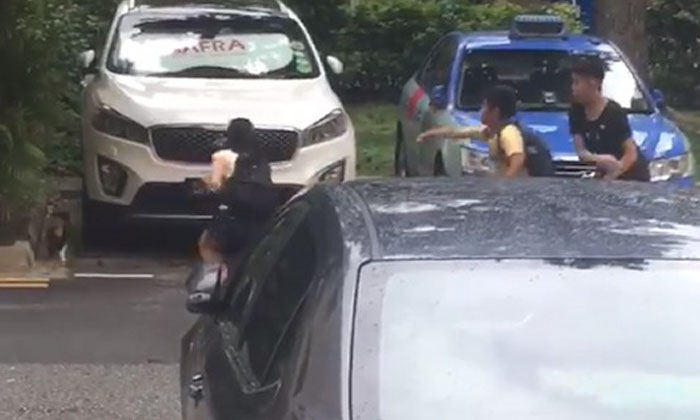 The Agri-Food and Veterinary Authority of Singapore (AVA) and the Society for the Prevention of Cruelty to Animals (SPCA) are investigating an incident of children allegedly throwing stones at a cat in Hougang.

The AVA said on Nov 24 that they were looking into the case, believed to have taken place at Block 653 Hougang Avenue 8.

A video of the incident was originally posted by Facebook user Jeray Tan on Nov 23 at 5.51pm and shared by Facebook page Fabrications About The PAP.

In the video, three kids can be seen looking underneath a white car.

After they see a brown cat on the road they pursue it, their booming footsteps frightening the feline in the process.

They throw stones at the animal but miss and the cat hides under the car.

Facebook page ROADS.sg also shared the video along with the caption: "These three kids were caught chasing and stoning this community cat. The video caught them in the act and (the video uploader) shouted at them after this to stop and behave themselves.

"Parents of these kids must take them to task and tell them that it is an offence to abuse any animal in Singapore. The stone was of fist size and would have been very damaging if it hit the cat.

"Moreover, the rocks thrown could have also damaged parked cars."

According to The Straits Times, the AVA said that it had received feedback on the case and was looking into it.

Jaipal Singh Gill, the executive director of SPCA said: “The cat is not currently in SPCA’s care and we are yet to ascertain if it suffered any physical injuries. Based on the video, the cat was clearly in distress.”

He also said that the society's inspectorate receives an estimated 50 cases every month, but cases of abuse of children are rare.

The majority involve the neglect of pets, while about 10 to 20 percent are cases involving allegations of animal abuse.

Dr Gill added that the SPCA counsels children involved in animal cruelty cases to explain to them why it is wrong to harm an animal.

To develop the child's empathy towards animals and to demonstrate appropriate handling techniques, an interaction session with an animal is also carried out.