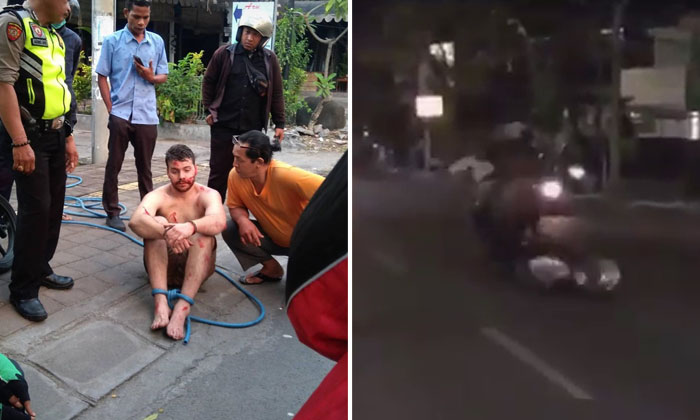 A 26-year-old Australian man was arrested in Bali, Indonesia after he was filmed fly-kicking a scooter rider in the early hours of Saturday (Aug 10).

The tourist, Nicholas Carr, was also seen throwing himself onto the bonnet of a moving car before he was chased by angry locals along Sunset Road in Kuta.

The tradesman also allegedly entered a property in Seminyak on the same night and threw the owner to the floor.

He is also accused of smashing a restaurant window with a stone and breaking the glass door of a convenience store.

He told local media that it took 10 people to subdue Carr before he was reportedly tied up with a hose and turned over to the police, reports Coconuts Bali.

He was later taken to the Kuta Police headquarters for questioning before being taken to a hospital for his injuries.

Carr's injuries have not been revealed but the police said the motorcyclist he kicked off his vehicle suffered cuts and bruises on his arms and hands.

He added: "When he was on his rampage, local people were trying to calm him.

"They tried to stop him but apparently, he kept rampaging.

When interviewed by local media, Carr said: "I apologise, I don't remember anything at all, [I] just want to apologise to everyone, victims, the Bali people, to anyone affected by this at all."

Carr purportedly offered to compensate his victims but the police chief said he would still have to face prosecution.

However, a settlement may reduce his sentence.

Carr is being held on charges of assault and damaging property.

If found guilty, he could face a jail term of up to two years and eight months.