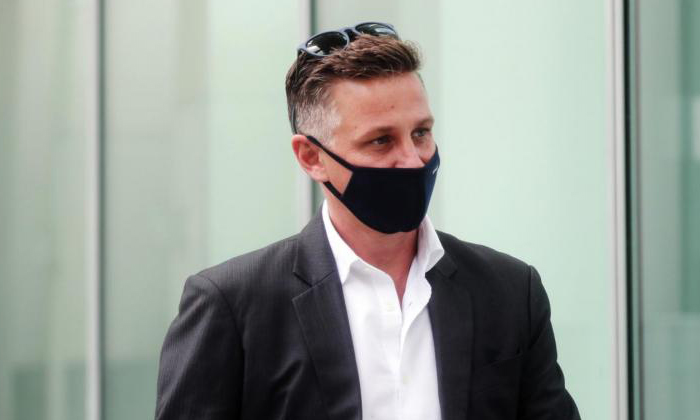 An Australian private jet pilot who had caused a nuisance and abused police officers while he was drunk has been deported from Singapore, the Ministry of Home Affairs said on Wednesday (May 11).

The incident happened after Mr Cameron Lachlan Milne, 41, had alcoholic drinks at a hotel in the Marina Bay area on the evening of June 14, 2018.

While drinking earlier with friends in the Boat Quay area, he had consumed two pints of beer, and later shared two bottles of vodka with friends at a bar in Pan Pacific Singapore.

He left the bar in the wee hours of June 15 to buy water at a nearby mall, while workers were carrying out cable installation works in the vicinity.

Mr Milne climbed into the lorry used for the installation works and threw the equipment around. The supervisor called the police after he refused to get down from the lorry.

When Mr Milne attempted to run away, he fell and pulled a national serviceman, who had been escorting the workers, along with him, tearing the NSman's shirt in the process.

After the police arrived, Mr Milne was arrested for causing annoyance while drunk, said MHA.

While in the police car, he repeatedly kicked the driver's and front passenger's seats where two police officers were seated.

An officer in the backseat tried to restrain Mr Milne but was kicked on the left side of the head behind his ear and suffered injuries. Mr Milne also tried to bite the officer's hand twice and hurled various abusive words at the three officers in the car.

On March 18, he was sentenced to 10 weeks' jail and fined $5,000 for offences such as causing hurt and using abusive words to a public servant, as well as causing annoyance to others while drunk.

Five other similar charges were taken into consideration for his sentencing.

MHA said Mr Milne's employment pass was cancelled after his conviction, and he was deported on Wednesday after serving his sentence. He has been barred from re-entering Singapore.

"MHA has zero tolerance of acts of violence against public servants who are carrying out their duties and will not hesitate to take strong action against those who do so," the ministry added.