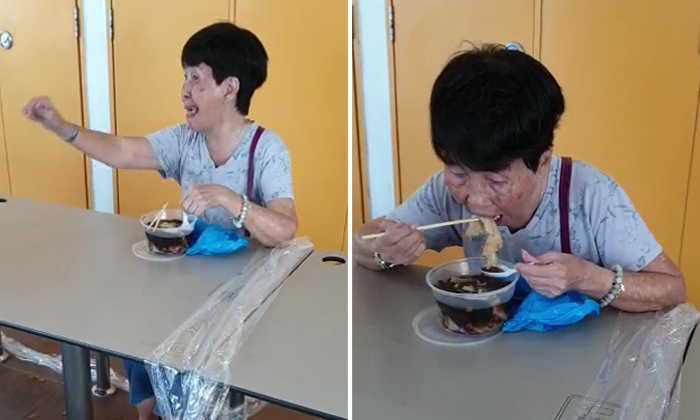 A woman was fined $300 for flouting safe distancing measures after insisting on eating her meal at Teban Gardens Food Centre despite enforcement officers advising her not to do so.

According to Lianhe Wanbao, the incident occurred at Block 37A Teban Gardens Road on Saturday (Apr 18), at around 10am.

Several Stompers alerted Stomp to a circulated video of the incident, showing the auntie seated at a table in the hawker centre with a box of kway chup.

The woman, who did not have a mask on, can be seen arguing with enforcement officers while consuming her food.

She is heard saying, "My back hurts... Have to walk very slowly... Never mind, I'm not scared," and tapping the table when officers tried to explain the situation.

When someone tells her that she might be fined, the auntie replies, "Orh gong then orh gong (fine then fine), I scared what?"

Despite being told that it is not worth it to be fined and that she can buy a lot of things with $300, the auntie repeatedly maintains that she is "not scared".

She also rejects an offer to help her pack her food for takeaway.

The auntie, who appeared to be in her 70s, was eventually issued with a fine of $300 as she refused to heed the enforcement officers' advice, reported Wanbao.

Responding to queries by Stomp, the Housing and Development Board (HDB) said its Safe Distancing Enforcement Officers had come across the woman eating at the hawker centre.

The officers advised her to return home and said that she would be fined if she continued to have her meal in the hawker centre.

"As the woman refused to comply, the police were activated," said the HDB.

"Her particulars were taken down by the police and she was issued a fine by the Safe Distancing Enforcement Officer."

The woman's son was contacted and he subsequently took her home.

In their statement, the HDB added: "We urge all members of the public to do their part and comply with the safe distancing measures in place to curb the spread of COVID-19."