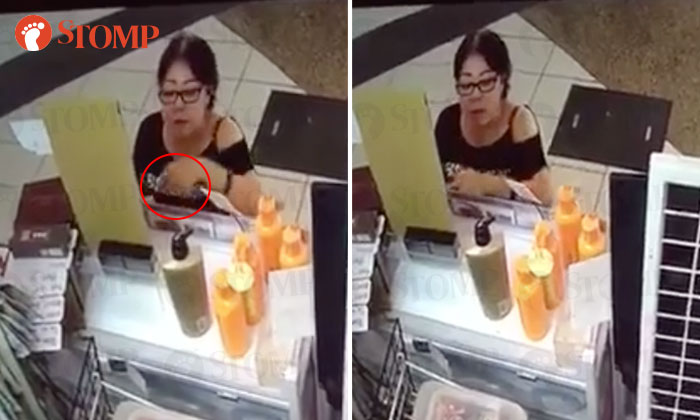 An auntie was caught on CCTV stealing a box of foundation from her shop at Block 724, Ang Mo Kio Central Market & Food Centre on Wednesday (July 12) at around 1.16pm.

Stomper RL who runs the cosmetic store which the culprit had stolen from alerted Stomp to the incident.

From the footage, the bespectacled middle-aged woman could be seen rummaging through a box cosmetic products, before taking one box and putting it into her handbag.

After stealing the product, the culprit looked around, before gesturing to another elderly woman in blue.

When Stomp later contacted RL today, (July 16), she said that the culprit had been arrested this afternoon after visiting her shop again at 1pm.

According to RL, she called the police immediately when she saw the auntie.

She then confronted the auntie for the theft, to which she fervently denied.

The police arrived, and RL subsequently showed them the CCTV footage of the auntie, and she was arrested.

In response to Stomp's media query, a Police spokesman said:

"A 67-year-old woman was arrested in relation to the case.