Auntie allegedly throws sand at woman's face, hides behind Ya Kun counter and tries to flee 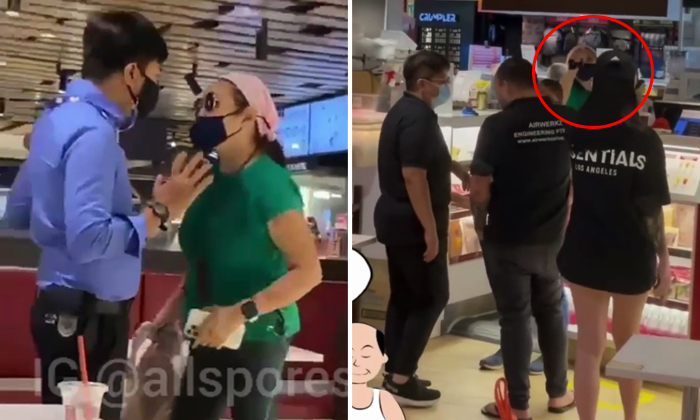 A dispute broke out after a middle-aged woman allegedly threw sand at a female diner's face last Wednesday afternoon (March 31).

A video posted online shows a young woman, who is clad in black, shouting at an older woman, who is wearing a green shirt, behind the eatery's counter.

(Note: This is a shortened version of the original video with vulgarities omitted)

The young woman can be heard hurling vulgarities and telling the other woman to "come out!"

She is also heard yelling, "You dare to pour thing on me you don't dare to come out ah!"

An employee wearing the Ya Kun uniform is seen trying to defuse the situation and speaking to the young woman's male companion.

This led many netizens to mistakenly believe that the young woman had been verbally abusing Ya Kun's staff.

However, a second video that subsequently surfaced online suggests that the older woman in green, who is not a staff member, had been the aggressor instead.

The older woman is seen coming out from behind the counter and trying to leave the scene, despite attempts by a security officer and Ya Kun staff to stop her.

She can also be heard saying repeatedly, "You don't have the right to detain me, you know."

A netizen, who identified himself as the young woman's male companion in the videos, said that they had been dining at Ya Kun when the older woman suddenly walked over to them.

She reportedly threw sand at the younger woman's face and Ya Kun staff subsequently called the police.

In response to a Stomp query, the police said they were alerted to a dispute at 252 North Bridge Road at 2.34pm.

A 53-year-old woman was apprehended under Section 7 of the Mental Health (Care and Treatment) Act.

Related Stories
Fight breaks out after drinking session escalates into 'private settlement' in Woodlands
Man arrested at River Valley after slapping woman and shouting at police: "Do you know who my mum is?"
Young Karen and Old Karen argue over table, film each other at Whampoa Hawker Centre
More About:
dispute
argument
arrest