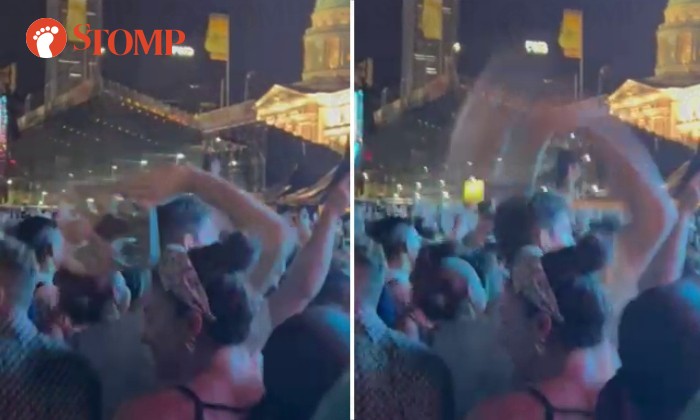 It was enough to make you want to swear again.

An audience member was caught on camera throwing an empty disposable cup tray into the crowd during Irish boyband Westlife's performance at the Formula 1 Singapore Grand Prix Concert on Saturday night (Oct 1).

Sharing a video of the incident at the Padang, Stomper Gerald said he had been looking forward to the F1 concert after a two-year break but encountered this "public nuisance".

He recounted: "During the Westlife performance, we noticed a group of Australians at the concert. Most of them were drunk and started smoking."

The Singapore Grand Prix website states: "Smoking is prohibited at sheltered areas, the pit lane, on-track, and crowded areas such as grandstands and concert zones."

The Stomper continued: "In the group, we noticed this guy who basically ruined many of the audience members' experience. This guy had been throwing his empty cup and tray onto another audience member.

"He definitely did not look like he was drunk and he seemed to enjoy ruining other people's experience at the concert.

"In the video, we managed to capture him throwing another tray and showing off to his friend."

The video shows a segment of the crowd enjoying the show as Westlife can be heard singing a cover of Abba's Gimme Gimme Gimme in the background.

Then a man holding a cup of beer can be seen flinging an empty disposable cup tray overhead at the people in front of him and smiling as he did so.

"I urge F1 to stop allowing such people to enter and to enforce the rules to stop people from smoking at the concert," said the Stomper.

This year's Singapore Grand Prix has set a new record in attendance with 302,000 people at the three-day event, reported The Straits Times.