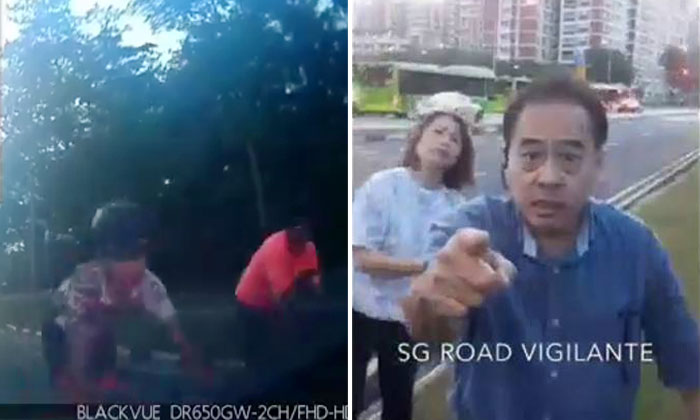 A couple who were involved in a heated dispute with a 15-year-old cyclist in Pasir Ris have shared their side of what happened.

In an earlier video, taken and shared by the cyclist, the couple are seen repeatedly grabbing at the boy's phone and demanding for his identity card.

In the original video post, the cyclist said he had hit the Audi with his hand after the driver had allegedly jammed on the brakes.

SG Road Vigilante posted a video shared by the Audi couple, showing what happened before the altercation.

In the post, the man said that the woman did not suddenly jam on the brakes, as the cyclist claimed.

The car was slowing to a stop at the traffic light.

Although the cyclist claimed to have only hit the car with his hand, he is seen in the video cycling into the car.

After hitting the car, he is seen cycling away.

The man in the video admits that they may have "overreacted" but were provoked by the teenager's 'attitude' and 'arrogance'.

He said when confronted, the cyclist denied any collision happened then changed his story to "it was only a scratch" after the couple informed him they had it on video.

He added that the cyclist attempted to "clean off the damages" before they could take a photo for insurance claim purposes. However, this part is not in the video.

In defence of asking for the cyclist's IC, he asked, "How do you verify his personal details?"

He said that they asked him to call his parents down to settle the matter but he refused.

"After all the refusal[s] from the cyclist, he decided to take his phone out and record us," he said.

"That is the result of the first video that he uploaded."

At the end of the post, he asked netizens: "If it was you and someone collided into your vehicle, refusing to apologise, refusing to provide any identification, giving arrogant attitude and start taking video of you, will you like it?"

In response to a Stomp media query, the police said the driver, a 60-year-old woman, the passenger of the car, a 66-year-old man, and the cyclist, a 15-year-old male teenager are currently assisting with police investigations into a case of voluntarily causing hurt.