Attack of the angry bird at Toa Payoh 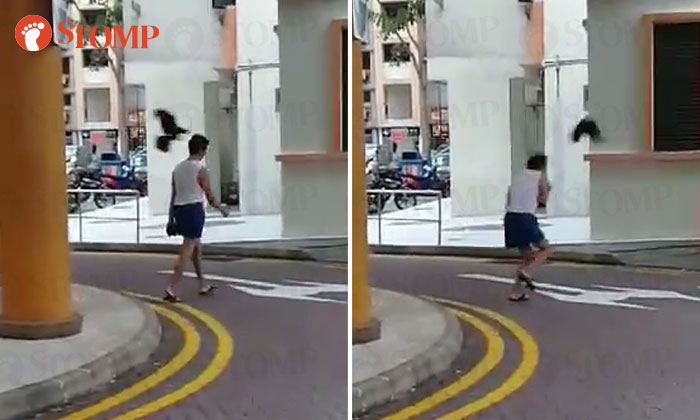 If you have ornithophobia (fear of birds) you should probably stay away from the carpark near Block 125 Toa Payoh Lorong 1.

Stomper Wicky alerted Stomp to a certain bird that has been "attacking" residents in the area.

"This bird at the roundabout has been attacking people," said the Stomper.

He also shared a video of the bird in action that he recorded on Sunday afternoon (Mar 31).

In the video, the black bird, which appears to be a crow, swoops in on a man wearing a white singlet and blue shorts causing him to duck and run for shelter.

It then targets an elderly woman who seems unfazed the first time and just rubs the back of her head as she continues to walk.

Seemingly unsatisfied, the bird flies a second time at her head before taking off in the other direction.

In February last year, it was reported that at least 30 residents at Toa Payoh North had come under attack by a flock of crows within two hours.

Birds may attack people during the fledgeling season when their chicks are learning to fly.

Crows are intelligent creatures and the adults are fiercely protective of their young so they may attack if people get too close, viewing it as an invasion of territory or a threat.

They are also known to be grudge-holding birds and people may be attacked if they have accidentally offended one of their kind.

During a crow attack, one should flee quickly and look for a sheltered area, or use an umbrella to hold off the angry birds.