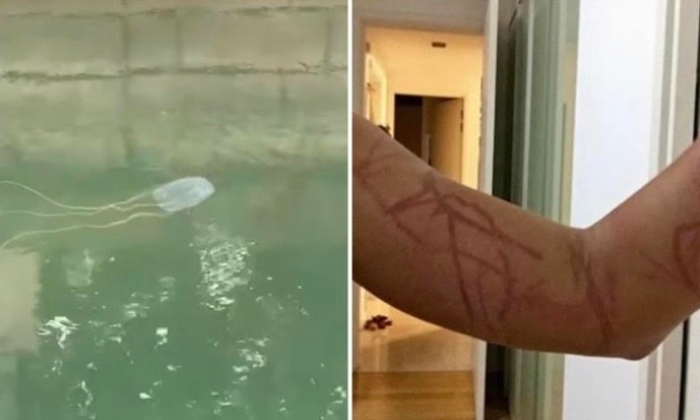 Fortunately, both victims survived the potentially fatal stings of the box jellyfish, which is considered the most venomous marine animal.

Conservation group Marine Stewards issued a public advisory on Saturday to warn people not to swim at Sentosa, Lazarus Island and St John's Island for two weeks after sightings of the jellyfish.

The creature was spotted at East Coast Park in March, with four more sightings this month alone at One Degree 15 Marina in Sentosa Cove, Tuas, Lazarus Island, and the latest was last Friday at Palawan beach in Sentosa, where a four-year-old girl was reportedly stung, Marine Stewards said.

The other victim, Australian Jade Dyson, told The New Paper yesterday that she was stung badly while swimming at East Coast beach in March.

Ms Dyson, 28, who has been working in Singapore for the past five years, said: "The pain was horrendous. I can't find a way to describe it, but it was debilitating. It was instant."

Ms Dyson said she saw tentacles stuck to her body, which "broke away like cobwebs" when she peeled them off her.

Her friend then pulled her 400m to shore while Ms Dyson clung onto the safety buoy the pair had brought with them for the swim.

"I could barely walk and the left side of my body was convulsing and shaking. My muscles were seized up, there was an intense pain in my lower back. My entire body was paralysed.

"I've had my fair share of being stung by all sorts of (poisonous ocean creatures) growing up in Perth, but this was nothing like that," said Ms Dyson, adding that the thought of being stung by box jellyfish did not sink in because it was not common here.

"I thought I was just having a really bad reaction to a sting from a normal jelly," she said, adding that she should have gone to a hospital immediately.

People from the nearby National Sailing Centre tried to help her, and her husband eventually came with antihistamines and painkillers.

When the swelling died down, Ms Dyson saw that the swollen marks were now purple welts across her limbs.

She immersed herself in hot water for several hours to ease the pain, and went to Thomson Medical Centre the next day, where she was given steroids and antibiotics.

It took about three to four weeks for the pain to completely go away and she still has scars from the incident.

Ms Dyson said: "I'm not trying to scare anyone, but I just thought people should know about these dangers and what to do if it happens."

On Saturday, another beachgoer said on Facebook that her four-year-old daughter was stung by a box jellyfish on Friday while paddling in the shallow waters of Palawan Beach.

She poured vinegar on her daughter's leg and gave her antihistamine for the pain and itch.

She said box jellyfish are highly venomous and its sting is extremely painful and can cause severe hypertension, extreme lower back pain, nausea, cardiac and respiratory arrest, and even death.

Dr Tun added that the relevant stakeholders and agencies have been alerted, and NParks is also working with academic partners from the National University of Singapore to collect water samples from various coastal areas to run environmental DNA analysis, which will help to detect the presence of the species in these areas.

The Sentosa Development Corporation said signages have been placed along Sentosa's beaches to alert guests on the jellyfish sightings. Guests should alert beachgoers and patrol officers if they see the jellyfish.

He said: "Climate change, ocean warming and changes to currents are moving box jellies outside their natural distribution and globally, the range of jellyfish is expanding."

She added that applying vinegar and immersing the injured area in warm water after removing tentacles with a towel or tweezers has proven to be an effective treatment.

She said: "Victims should try their best to keep calm and get out of the water immediately as thrashing might stir up surrounding water and increase the risk of the jellyfish's tentacles wrapping further around the victim. The victim also faces a risk of drowning after being stung."

Related Stories
Stomper's close encounter with 4m-long king cobra at 'secret' location is truly remarkable
Don't be surprised when you come across these while walking on the beaches of Australia
Man who sold illegal wildlife and transported them in plastic containers fined $6,600
More About:
animals
dangerous
jellyfish
injured