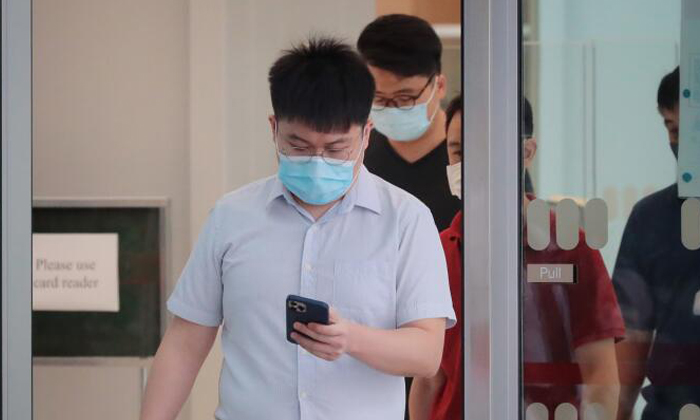 A scientist from the Agency for Science, Technology and Research (A*Star) was in a common area of his condominium complex when he exposed himself and performed a sexual act.

The Chinese national was later evicted from his unit and, from April 14 last year, barred from entering the condominium grounds.

Despite this, he returned to Barossa Gardens five days later and trespassed on it.

Xie pleaded guilty in a district court on Monday (July 5) to two counts of sexual exposure.

He also admitted to one count each of criminal trespass and an unrelated charge of dishonest misappropriation of property.

Deputy Public Prosecutor Stephanie Koh said a 37-year-old woman was near her unit some time between 8am and 9am on April 12 last year when she spotted Xie committing the sexual act while staring at her.

She recorded a video of his actions and the police were alerted.

Meanwhile, a 26-year-old woman also spotted Xie committing the offence and told her boyfriend what she saw.

The man confronted Xie, who ran back to his unit. The man then informed the condominium's management about the incident.

The Chinese national was evicted, only to trespass on the property on April 19 last year by entering through an unlocked door that led to a rubbish collection area.

The court heard that in June last year, he was still under investigation for exposing himself to the two victims when he appeared naked before a third woman, aged 32, at another property.

In an unrelated incident on April 10 last year, Xie had misappropriated a bicycle worth about $600 after he found it parked by the roadside near Alexandra Retail Centre in Alexandra Road. The bicycle has not been recovered.

On Monday, the court heard that Xie has a history of exhibitionistic and adjustment disorders. Magistrate Lau Qiuyu called for a report to assess his suitability for a mandatory treatment order (MTO).

Offenders given an MTO have to undergo treatment to address their mental issues, in lieu of jail time.

In a statement on Monday evening, A*Star said: "(We hold) our employees to the highest standards of conduct and behaviour, and (take) a firm stand against any proven acts of law-breaking.

"We have suspended Xie and initiated our internal disciplinary process. We will also take into account the court’s assessment of his mental condition."

For each count of sexual exposure, an offender can be jailed for up to a year and fined.