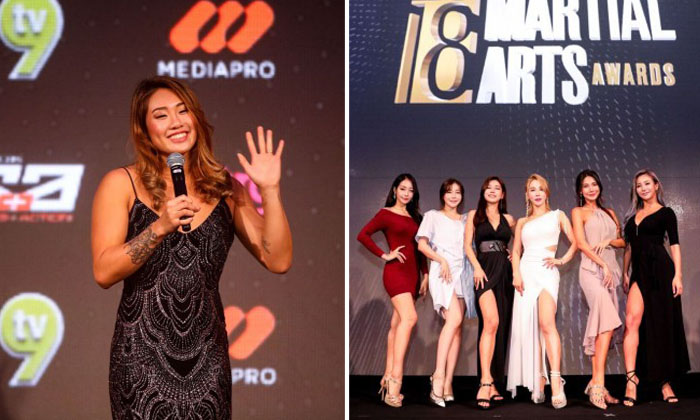 On Nov 8, the biggest Asian martial arts personalities were honoured at the 2018 Global Martial Arts Awards, which was held at the JW Marriot Hotel Singapore South Beach.

Presented by 18 leading broadcasters from across Asia, the Gala Dinner and Awards ceremony was also graced with the presence of several of the Singapore-based ONE Championship’s world-class athletes and other martial arts personalities.

Filipino superstar Eduard Folayang was honoured as the Martial Arts Hero of the Year.

He has set his sights on capping off a banner year in 2018 with a championship win when he takes on Singapore’s Amir Khan in the main event of ONE: CONQUEST OF HEROES on Nov 23.

Taking home the Male Athlete of the Year award was ONE Middleweight and Light Heavyweight World Champion Aung La N Sang of Myanmar.

The 33-year-old has inspired a whole nation in Myanmar with his incredible performances in the cage, highlighted by three exhilarating knockouts in 2018.

One of these knockouts was recognized as the Bout of the Year.

The Burmese hero’s epic clash with Ken Hasegawa at ONE: SPIRIT OF A WARRIOR is considered to be one of the most exciting bouts in the history of mixed martial arts, as it saw two warriors pushing each other to the limit for five incredible rounds.

Near the end of their five-round encounter, Aung La N Sang scored a thunderous uppercut that ultimately ended the contest, to the delight of the home crowd in Yangon, Myanmar.

Meanwhile, the Female Athlete of the Year award was bestowed onto ONE Women’s Atomweight World Champion Angela Lee.

The 22-year-old Singaporean is still undefeated in the cage and is one of the youngest mixed martial arts world champions in history.

In her only appearance in 2018, Lee conquered her toughest adversary yet in Mei Yamaguchi for the second time, and will now look to set her sights to even loftier goals in 2019.

Thailand’s Stamp Fairtex won Breakthrough Athlete of the Year award after emerging from Rich Franklin’s ONE Warrior Series and later defeating Kai Ting Chuang of China at ONE: KINGDOM OF HEROES to be crowned as the new ONE Kickboxing Atomweight World Champion.

ONE: KINGDOM OF HEROES was not only the promotion’s biggest event of the year, it was also named as Event of the Year.

The main event featured world-class boxing for the first time in a ONE card as WBC Super Flyweight Srisaket Sor Rungvisai defended his title against Iran Diaz in front of thousands in attendance and a record 25 million viewers worldwide.

Notable ONE personalities were also awarded in the summit, as ONE Strawweight World Champion Joshua Pacio claimed Submission of the Year honours for his spectacular modified keylock on Pongsiri Mitsatit that the world now knows as “The Passion Lock” while five-time Muay Thai World Champion Nong-O Gaiyanghadao was cited as the Muay Thai Athlete of the Year.

Baguio, Philippines-based Team Lakay and its coach, Mark Sangiao, also bagged Gym of the Year and Coach of the Year awards, respectively.

Here is the full list of winners for the event:

Related Stories
4 ways Singapore's Tiffany Teo can triumph against Michelle Nicolini in MMA showdown
Why Juggernaut Fight Club is more than just a team of athletes
Check out 23-year-old Amir Khan's fastest knockouts of his career inside the ONE cage
More About:
ONE Championship