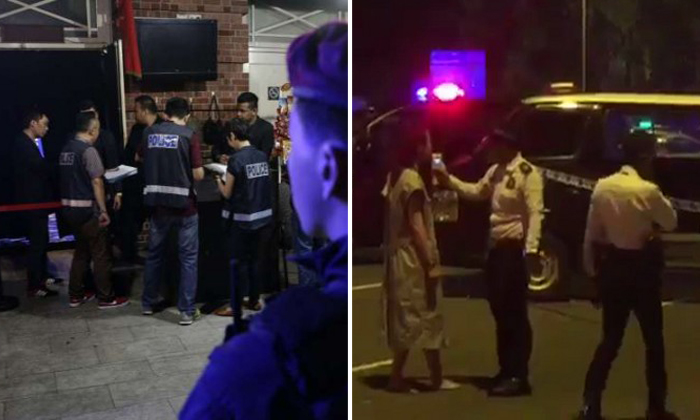 After the once vacant St James Power Station opened in 2006, it quickly became one of Singapore's most popular nightlife outlets.

Nine clubs and several restaurants were housed in what served as a coal-fired power station in the 1920s. It was the go-to destination for revellers offering everything from Dragonfly, for the Mandopop fans, to Powerhouse for ravers.

But partygoers are a fussy lot, and as new watering holes mushroomed all over Singapore, the lights went dim at St James. Even as it fought to regain some of the shine, trouble brewed.

Last Sunday, a patron of Postbar, one of the outlets, was killed.

Mr Satheesh Kumar Manogaran, 35, was found outside St James, bleeding from stab wounds. Although he was rushed to hospital, he died and four men have since been charged with his murder.

Following the incident, law enforcement agencies, including the Criminal Investigation Department and Central Narcotics Bureau, raided six outlets at St James at 2am yesterday, checking 40 people for breaches, which included staff not carrying their passes.

Two people were arrested during the operation for using abusive language against public servants.

The operation included a Traffic Police roadblock against drink driving in the nearby Keppel Road.

Said Superintendent Lim Han Woon, commanding officer of Bukit Merah West Neighbourhood Police Centre: "Police take a serious view against illegal activities. This multi-agency joint operation led by the police is an ongoing effort to clamp down on these activities."

Just one bad week? Hardly, said regulars, who described fights as a regular feature of the centralised nightspot that can pack thousands. One club, Toxic, formerly Powerhouse, could alone host 1,000 partygoers.

The owner of Postbar, who wanted to be known only as Ms Daisy, said scuffles are not uncommon, but are quickly broken up by her seven- member security team when they happen inside. The club caters to mostly young hip-hop fans.

"When (members of) my security team detect a problem, they step in... But most of the fights happen outside the club," she said. "And fights are common everywhere, as long as it's crowded. You don't need to be at a club, it can even happen at a hawker centre."

It was not the first incident at Postbar. Last September, four men were arrested shortly after hurling four Molotov cocktails at the entrance following an argument between one of the men and a staff member.

St James has also had problems in the past with the security men, or bouncers, hired from private firms. In 2012, 15 bouncers were arrested after beating up a man so badly that he ended up in a coma.

Mr Shawn Nanda, head of a firm providing security services to five local clubs, said of the role bouncers play: "My security guys will intervene, make space between the parties or usher them out. But in certain situations, we're not in control because it's a public space. If it gets out of hand, we'll call the authorities."

Mr Nanda, who does not provide bouncers to any of the St James outlets, said revellers can also turn abusive and violent. In 2014, a customer slashed a St James bouncer on the first day of his job. Days later, a bar brawl broke out at Club Pyramid, also at St James, with patrons hurling bottles at one another.

Freelance DJ Leon Ho, 32, who has had gigs at St James, said the venue has lost some of its shine, adding: "It doesn't really have a premium club feel and it has received some bad press because of the fights."

Show producer and DJ Andrew Teo, 38, played at one of the St James clubs about two weeks ago.

"When I was there, I did hear about a fight at another club. In fact, patrons and club management told me there are at least three fights a night," said Mr Teo.

In 2014, the St James entertainment business was reportedly divested and taken private. There are 10 clubs at St James now, ranging from Rupee, frequented by Bollywood fans, to Club Hollywood, a Thai disco. Most of the outlets are privately owned, like Postbar.

The recent incidents, and their effect on St James' reputation, have caused Ms Daisy to worry about her business of seven years.

St James' managing director Gordon Foo said it is working with the authorities to address law and order issues in and around the immediate vicinity. He added that in recent weeks, it has started enforcement action against errant parties.

"The management remains committed to ensuring that all outlets abide by the highest standards - which is in line with St James' historical profile," he said.