Arrested: S'pore driver who pulls out 'knife' in dispute with Malaysian driver 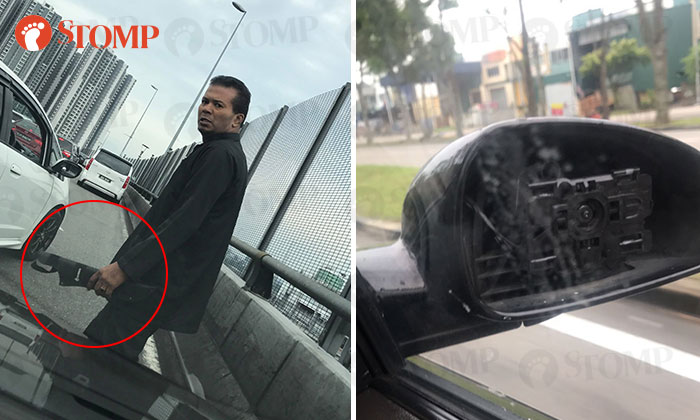 A road dispute on Friday afternoon (June 15) turned violent after the driver of a Singapore-registered Honda brandished a weapon and allegedly shattered the side mirrors of another motorist's car.

In a phone interview, Stomper Jeck told Stomp that he had been driving from Malaysia to Singapore and was past the Johor Bahru Customs, Immigration, and Quarantine Complex (CIQ) at about 2.10pm when another white Honda SJH8936L attempted to cut into his lane.

The 27-year-old Malaysian did not give way, but the Honda driver did not stop.

In the process, Jeck's car was scratched.

After that, the Honda driver wound down his window and started shouting at him.

“I couldn't hear him that well because he was already shouting even before I could wind down my window.

“I shouted at him back. I told him that he forcefully cut into my lane and scratched my car, yet still had the audacity to shout at me.”

The Honda driver who had moved ahead of Jeck then stopped his vehicle and alighted. 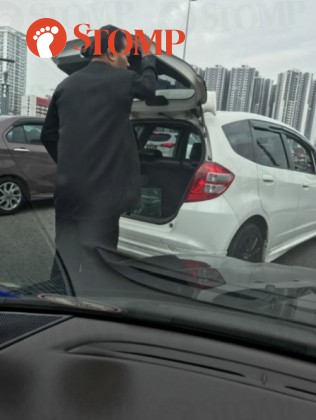 He went to the car boot and took out what appeared to be a sheathed knife, before walking to Jeck’s car, while shouting at Jeck to open his door.

Shocked by the belligerent display Jeck wound up his window and locked the door.

Recalling the harrowing experience, he said:

“I was really quite scared then.

"He took out the knife from the sheath and waved it around.

“I quickly locked the door but he just kept shouting and waving the knife.”

A female companion, allegedly the wife of the Honda driver then alighted and snatched the knife away from her husband before running back to their car.

The Honda driver continued shouting at Jeck before returning to his car.

After that Jeck followed the Honda as they made their way into the Woodlands Checkpoint in Singapore.

Along the way, he called the police to inform them about the incident earlier.

However, that was not the end of the traumatising ordeal.

At about 2.35pm, the Honda driver suddenly stopped his car again and got out.

Two other men, allegedly sons of the Honda driver, had been driving behind Jeck.

The two men also allegedly alighted their vehicle and went to Jeck’s car to stop him from leaving.

The Honda driver then reportedly kicked and punched Jeck’s car until both the side mirrors were damaged.

“I could not take photos as I was on the phone with the police at the time.

"He did not have the knife with him."

Jeck bided his time and waited for an opportunity to cut into another lane.

He managed to escape, adding:

“A taxi driver drove beside me and asked me to call the police.

“He told me not to worry as he had seen the entire incident and can vouch for me.”

When Jeck reached the Singapore customs at the Woodlands Checkpoint, he was told that by Immigration and Checkpoints Authority (ICA) officers that he had to turn back as both his side mirrors were damaged.

The Honda driver was subsequently detained by police officers.

“On June 15, 2018, at 2.34pm, the police were alerted to a case of possession of offensive weapon and mischief at Woodlands Checkpoint.

“A 51-year-old man was arrested in relation to the case. Police investigations are ongoing.”