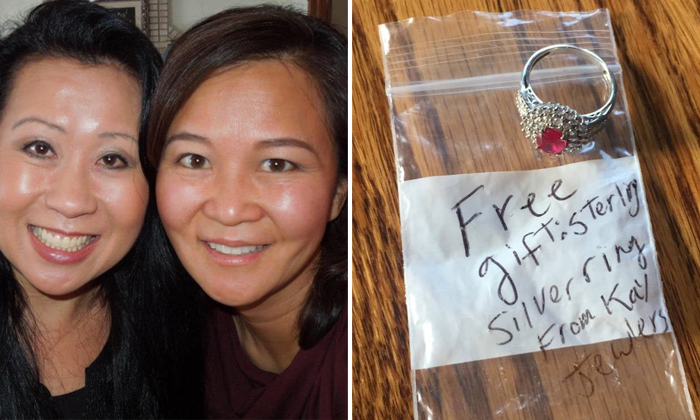 A woman has taken to Facebook to warn others about a scam in the United States that could have resulted in a kidnapping or abduction.

Savannah Nguyen shared how her mother had just gotten into her vehicle after shopping at a mall, when a large SUV with tinted windows pulled up next to her despite there being many other empty car lots.

She drove off but heard something tapping against her windshield on the whole journey home.

It was only when she reached home then did she get out of her vehicle and identify the source of the noise.

Someone had placed a 'present' under her windshield wiper that came with a note saying, "Free gift: Sterling silver ring from Kay Jewelers".

"This is exactly how human trafficking and abductions take place.

"They probably watched her get out of her car and placed it on her window, and waited for her to come back.

"Who knows what would have happened if my mom had gotten out of her car to see what was under her windshield while she was still in the parking lot.

"Of course a person would be curious and want to read the writing on the bag, but in the two seconds it takes you to grab the bag from under the windshield to read what is on there, it might already be too late.

"Bad things can happen in the blink of an eye."

She also urged for everyone to be cautious as well as to share the post so that people are aware of such a trick.

Savannah's post has gone viral with more than 22,000 shares, with many netizens commenting about how scary the incident was and what a close shave it had been for her mother.

Read her full post here or browse the gallery to see it.