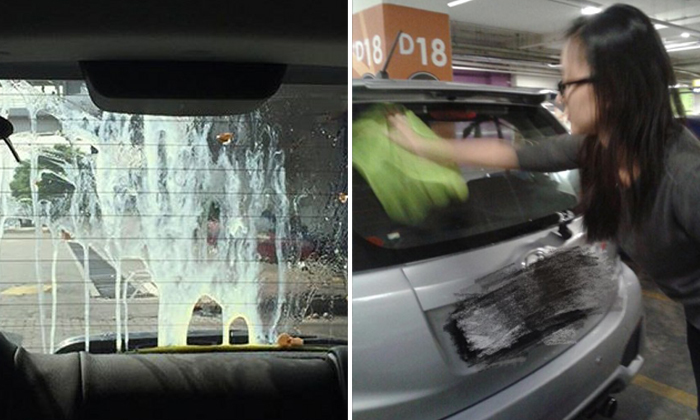 A woman in Malaysia picking up a friend at the mall was egg-ed by cabbies after they thought she was an Uber driver picking up a passenger.

"So... I was happily picking my friend Alya Zulaikha from the Kelana Jaya train station on a regular morning as we head to Paradigm Mall to meet our secondary school friends.

"As soon as she came up my car, a guy whose built was pretty tough and dressed in a white uniform with black slacks came shouting at me and my friend for no apparent reason.

"As she boarded and closed the doors, I heard a thump from behind my car.

"Immediately, another guy in similar uniform threw EGGS at my car."

Sau Mun then realised that they were taxi drivers who thought she was an Uber driver.

"The world, sorry country that we live in now is beyond my description as the so called 'first world country' citizens who despise being termed as 'third class mentality' has stooped so low to finding ways to vent their anger.

"First of all, where on my car did it state that I'm an UBER driver? You have failed to identify me as one and yet proceeded with your shameful act. Shame on you.

"Secondly, who gave you the right to verbally attack me and physically damage my car with precious eggs which are staple food to some people? Clearly, you have proven your intelligence.

"Instead of egg-ing me, can't you find business somewhere else? Holding myself, I egg-nored them but could not hold in my discontent.

"I didn't go down as I prioritized my friend and my safety as we're clearly physically weaker than the group of taxi drivers.

"So I made a U-turn and returned to the scene to record and hopefully gather evidence of their number plates. By the time I arrived, those cowards disappeared."

The taxi versus Uber and GrabCar dispute has been an ongoing problem in Malaysia. Previous incidents also show cabbies attacking Uber drivers and forcing their pasesngers to alight. In another incident, the Malaysian cabbies threatened to block main roads if the driving apps were not banned.

"To be honest, I never expected myself to be involved in the whole TAXI/UBER drama, but now that it happened to me, an innocent civilian that has no affiliation with either party, I have no choice but to voice out my discontent and create awareness or this drama would continuously happen and victimize the lives of innocent people.

"The only way to solve this is not by revenge, but through endurance and hope that we will get people's support and prove justice to them one day. How would the public even feel safe anymore in taxis?

"I feel so sorry and embarrassed that this is the society I live in, the society which I proudly claim as my home country Malaysia."