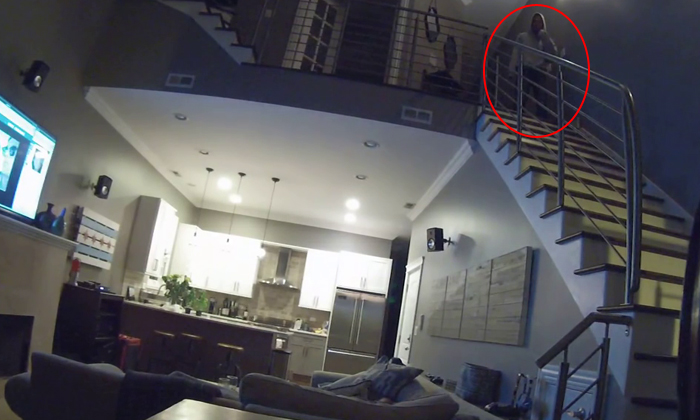 Ever seen 'The Strangers (2008)'? The horror film might have become a reality for a couple in Chicago, United States.

CCTV footage showed a hoodie-clad man creeping towards the stairs on the second storey of the couple's apartment on July 25, as they were sleeping on a couch near two dogs.

However, the mysterious intruder moved so stealthily that the dogs remained asleep.

The man then stood at the top of the flight of stairs and appeared to watch Mr Robot, which was showing on the television.

According to DNAinfo, Mr Jack Mackercher said he and his girlfriend, Miss Jordan Buranskas, fell asleep on their couch while watching Netflix, and forgot to lock the balcony door on their upper floor.

The next day, when Miss Buranskas could not find her purse (which was the only item found to have been stolen), the couple reviewed footage from the security camera and saw the 'creepy' scene.

"He stood there for about 5 minutes the first time then walked away, then came back and hovered over us again for another 5 minutes," Miss Buranskas was quoted as saying by ABC7 Eyewitness News.

The hooded intruder has been nicknamed the 'Creeper Ghost' and is believed to be responsible for burglaries in the neighbourhood.

Residents have apparently spotted him wandering around the neighbourhood and trying to break into homes.

A suspect was later arrested on July 27 after he was seen in the neighbourhood.

In an interview with WGN-TV, Miss Buranskas said that she preferred to think that the hooded man was "watching TV, not us", as that is "slightly more comforting".