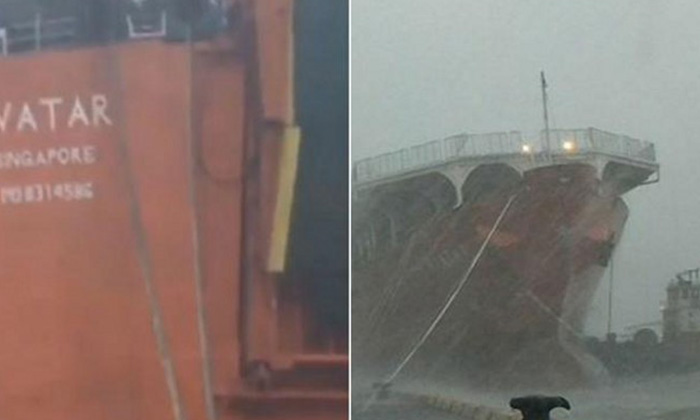 A Singapore-registered cargo ship was caught near the eye of Super Typhoon Nepartak on Friday (July 8) around 7.55am.

The typhoon made landfall at Taitung on the east coast of Taiwan shortly before 6:00 am (2200 GMT Thursday) and continued on a westerly path towards Kaohsiung where MV Avatar was berthed.

Taiwan news outlet Liberty Times reported that the vessel was unmoored by gale-force winds, snapping most of its berthing ropes in the process.

According to The Weather Channel, wind speeds from Typhoon Nepartak reached up to 150 mph (200km/h).

Kaohsiung Port Authority told The Liberty Times that MV Avatar nearly lost all its lines and was moving dangerously close to the warships in its vicinity, hanging by a single taut rope tied to the pier bollard.

Two 3,200-horsepower tugboats were immediately dispatched to berth MV Avatar back alongside Pier 2 at Kaohsiung Port.

The director of Kaohsiung Ferry Boat Business Association told Apple Daily that the 15,800-tonne vessel arrived on July 6, just as the typhoon was approaching.

On Friday morning, the vessel's stern rope was the first to snap, followed by another five ropes.

Fortunately, there were no injures. Mooring operations can be extremely hazardous, especially when the lines get taut. In 2011, a cargo ship was berthing in Chiba Port when the mooring rope snapped and hit a crew's chest, killing him in the process.