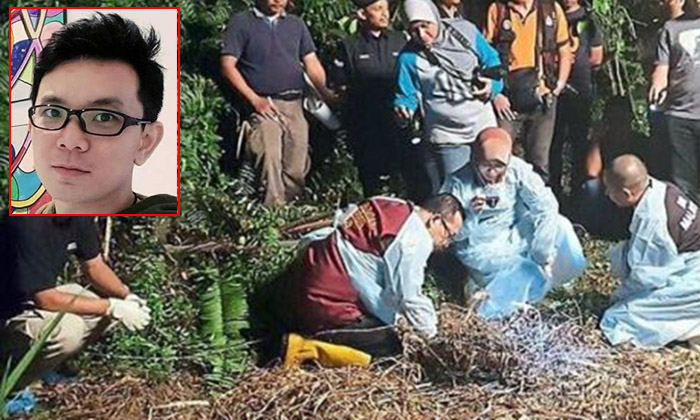 A Malaysian man working in Singapore has allegedly been killed for trying to go after someone else's girlfriend.

According to The Star, the dispute is believed to have stemmed from love and revenge.

The victim was 31-year-old gas engineer, Tan Chuen Take, who worked in Singapore and resided in Taman Dato Chellam in Ulu Tiram, Malaysia.

He had reportedly gone missing on June 26, a day after he was last seen, via his residential area’s closed circuit television (CCTV) footage, leaving his house at around 5pm.

Johor police chief Comm Datuk Wan Ahmad Najmuddin Mohd said that a couple -- 22-year-old woman and a 32-year-old man -- were arrested in Taman Indahpura, Kulai at 3am on Friday.

He said the arrest led to the discovery of the victim’s body at around 6pm, buried in a forest near Kulai, beside the northbound of the Second Link Expressway.

“The couple abducted the victim without asking for a ransom from his family, and we believe that the motive for the abduction and murder was jealousy and revenge,” Comm Wan Ahmad said yesterday.

After the find, Chuen Take’s body was sent to Hospital Sultanah Aminah for a post mortem and DNA test.

Investigations are ongoing to find out whether the female suspect was involved in helping her boyfriend bury the victim after murdering him, Comm Wan Ahmad said, adding that police were looking into the possibility of the involvement of more suspects.

Comm Wan Ahmad said both suspects were remanded to help with investigations into the kidnapping and murder.

A source said Chuen Take’s body was found with wounds and burn marks.

It was learnt that the victim, from Penang, was the only son among five siblings and started working in Singapore about two years ago.

But when he could not be found or contacted, his employer in Singa­pore also lodged a police report in the island republic.

At the time the report was made in Singappore, Chuen Take did not show up for work and he also did not apply for leave.

It was reported that his elder sister Tan Siu Mei, 36, said the family sensed something amiss as he did not reply any of their family member’s calls or WhatsApp messages on June 25.

His father, Tan Yong Chun said Chuen Take was a filial son who had never failed to call him daily.

Tan did not put much thought into it when his son stopped calling, thinking that he was caught up with work.

Those with any information regarding the case can contact the police at their hotline 07-221 2999 or head to the nearest police station to aid in investigations.