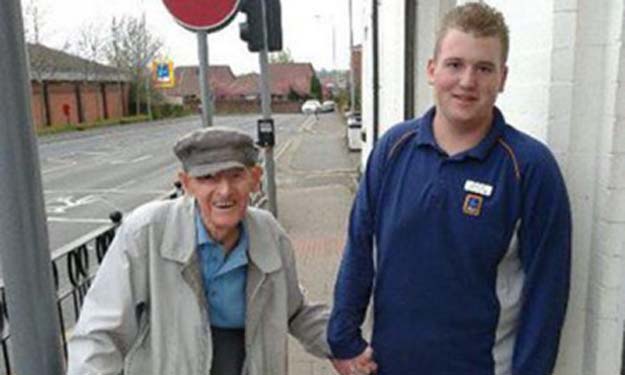 A teenage supermarket worker has become a social media celebrity after a photo of him carrying a 95-year-old customer’s shopping bag home went viral.

The 18-year-old worker, Christian Trousedale, held the elderly man’s hand, as the two slowly made their way toward the pensioner’s home in Horwich, near Bolton, in England.

The teenager’s act of kindness was observed by Samantha-Jayne Brady, who asked the pair to pause so she could take a picture, which she later posted on Facebook.

The image of Trousedale and the elderly man has since been “liked” an astonishing 265,000 times (and counting) and shared by 72,000 users, reports ViralSpell.

Brady, who works at a fish and chip store near the supermarket, explained that she was taken aback by Christian’s “selfless, thoughtful and caring gesture”.

She wrote: "Need to share this, whilst working earlier we watched this lovely lad walking this little old man home.. He wasn’t very agile, nor fast but Christian walked with him ever so patiently and slowly, chatted along with him and carried his bag for him.

"It was a lovely thing to witness and they seemed to be having a good chit-chat along their way. High 5 to Aldi for letting him do this and high 5 to Christian from Aldi in horwich for his selfless, thoughtful & caring gesture!

"I desperately want this lad to get some kind of recognition from his workplace so if this gave you a little more faith in mankind PLEASE share! Good people still exist."

Trousedale, who is a college student, works part-time as a stock assistant at the Aldi supermarket. He told the Bolton News that he did not think his actions were extraordinary, adding that he had been brought up to respect his elders.

He said: "I asked my manager if it was OK to walk him home and he said that was the right thing to do, so I did. We had a good chat about everything from the General Election to the history of Horwich — he knew lots about everything.

"It is very strange because this is just something I would normally do, my parents have raised me to treat other people like you want to be treated yourself."

Both Trousedale’s and Brady’s Facebook accounts have been flooded with praise since the picture was published on Friday.

As a “thank you” for spreading their 18-year-old employee’s good deed, Aldi sent Brady a bottle of wine and a bunch of flowers.