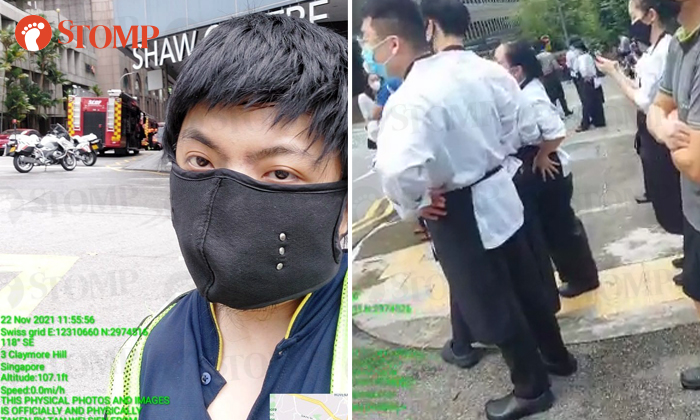 On Monday (Nov 22), the first day when eateries welcome back more vaccinated diners, a fire broke out at a Spanish restaurant under the Les Amis Group at Shaw Centre in Orchard.

The incident happened at La Taperia and a spokesman for the group said for the safety of guests and staff, all of their concepts at Shaw Centre will be closed on Monday, until investigations have been fully conducted.

The spokesman said: "We have closed off all new reservations for today and are contacting all affected customers.

"We will do our best to offer them alternatives at our other concepts outside of Shaw Centre, if appropriate."

The Singapore Civil Defence Force (SCDF) said it was alerted to a fire at 1 Scotts Road at about 10.15am.

It was extinguished by a water sprinkler system and by SCDF using one water jet.

About 200 people self-evacuated from the premises before SCDF's arrival.

Video taken by Stomper Tan Wei Sien, who works in the vicinity.

There were no reported injuries, SCDF added.

When The Straits Times visited Shaw Centre at about noon, a burning smell hung in the air. The entrance to the retail side of the building had been taped off and shoppers were turned away by building staff and told to enter from another entrance.

The ceiling on the ground floor was observed to be dripping with water and the ground was wet.

A staff at a nearby restaurant not related to the group, who declined to be named, said they were preparing to open for the day at about 11.30am when security informed them of the fire and told them to evacuate.

“We didn’t see any smoke at first but then there was thick heavy smoke on the second floor as we walked down the stairs. There wasn’t really panic. When we got outside there were a lot of people standing around waiting,” he said.

Monday was the first day when vaccinated diners could eat at food and beverage outlets in groups of five, regardless of whether they live together.

Restaurants under the Les Amis Group include the three-Michelin-starred Les Amis Restaurant and Japanese restaurant Aoki on the first storey of Shaw Centre, and Tarte by Cheryl Koh on the second storey and tendon eatery Tenjin on the third storey.