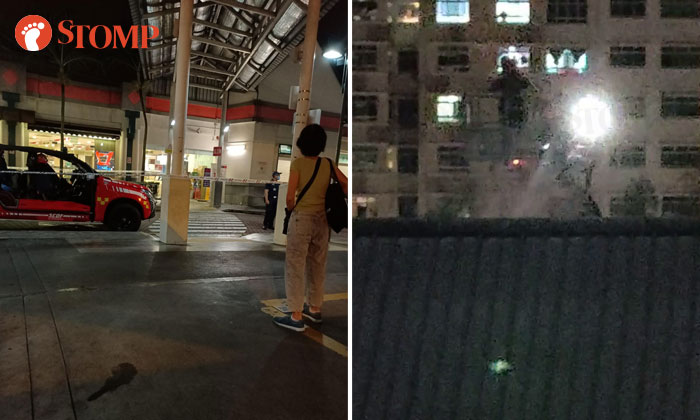 About 20 people were evacuated after a fire broke out at a coffee shop at Fajar Shopping Centre on Thursday morning (July 23).

The Singapore Civil Defence Force (SCDF) told Stomp it was alerted to the fire at 446 Fajar Road at about 3.30am.

The coffee shop was closed at the point of the fire.

Stomper Pasidah shared with Stomp a video of SCDF officers at the scene.

In response to a Stomp query, the SCDF said it conducted forced entry into the coffee shop and extinguished the fire, which involved contents of the stalls, using one water jet.

"The police evacuated about 20 persons from the neighbouring units as a precautionary measure, and they have since returned," an SCDF spokesman said.

"SCDF assessed one person for smoke inhalation, and the person subsequently refused conveyance to the hospital."

Related Stories
1 taken to hospital after car bursts into flames in Woodlands
Vegetation fire at Bukit Batok 'the size of 1 football field' put out by SCDF
150 evacuated after fire breaks out in Jalan Batu bedroom
More About:
fire
coffeeshop
scdf