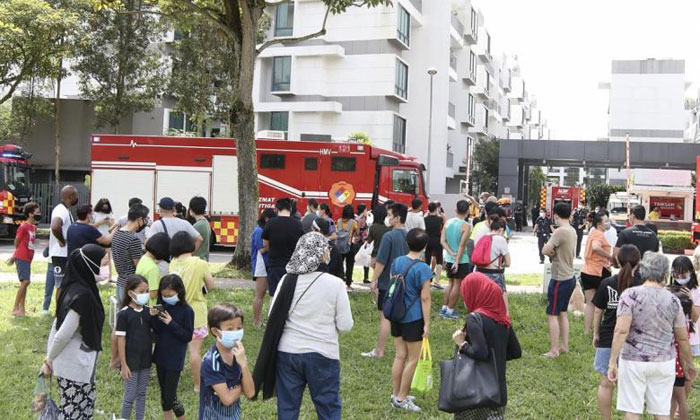 She was in the kitchen cooking when police officers came knocking on her door, instructing everyone to evacuate as there was a chemical spill in a nearby block.

The woman, who wanted to be known only as Madam Koh, her husband and two children quickly followed the instructions and gathered on the road outside their Rosewood Suites condominium in Woodlands.

They were among around 100 anxious residents who congregated there yesterday morning, as Singapore Civil Defence Force (SCDF) officers in hazmat suits investigated the spill, a small one at the balcony of an apartment on the first storey of one of the blocks.

The officers retrieved a sample for testing before neutralising the affected area with a decontaminant. The sample was later found to contain substances commonly found in pesticides.

Madam Koh, 47, described the situation at the evacuation site - which had been blocked off to vehicles by SCDF and police officers - as a little chaotic as there were many people grouped together in a small space.

Some residents had evacuated with their pets.

She told The New Paper: "There were no loudhailers at first, and we could not hear the instructions well. Everyone was also trying to make sure we were socially distanced."

The residents were told they may not be able to return home for two hours.

Said Madam Koh: "We thought the chemical could be really serious and that was why they had to do thorough cleaning... We followed their instructions and did not cause further chaos."

The SCDF was alerted to the incident at 9.30am and its spokesman said all residents were allowed to return to their units by 1.30pm.

TNP understands the condo management spent the afternoon addressing concerns from residents about the incident. It did not respond to request for comment by press time.

Madam Koh said the instructions given by staff from the condominium's management could have been clearer during the evacuation.

The location of the evacuation site could also have been better planned, she added.

She said: "For the seniors or people with medical conditions, standing under the sun for a long period can be a problem...

"We were lucky it was not raining, or we would not know where to go and find shelter."